Latest on The Underground Map... 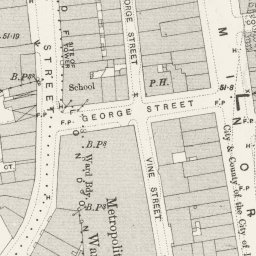 The name is derived from the former Abbey of the Minoresses of St Clare without Aldgate, founded in 1294. A small side-road off Minories is named St Clare Street. Minories was in the ancient parish of St Botolph without Aldgate until 1557, when it became extra-parochial.

The area was a âpapal peculiarâ outside the jurisdiction of the English bishops. The abbey was dissolved in 1539 and the property passed to the Crown. In 1686, the area became part of the Liberties of the Tower of London.

Individual market vendors sell a wide variety of goods, including fresh produce, cooked food, music CDs, household goods and clothing. Individual vendors rent their stalls from Transport for London, who own the land on which the market sits. The market is open six days a week.
»read full article


Dimco Buildings
The Dimco Buildings housed the earliest (extant) example of an electricity generating station built for the London Underground Originally built in 1898 at the same time as the Wood Lane depot, the buidings were constructed as a power station for the Central London Railway - precursor of the Central line. The architect was Harry Bell Measures.

The power station was closed on 18 March 1928 when power for the line began to be supplied from Lots Road Power Station. The building was later used by the Dimco power tool company.

The Dimco buildings were used as a filming location for the Acme Factory in the 1988 film ’Who Framed Roger Rabbit?’.
»read full article

It was used until 1969 when a new fire station was opened by the Greater London Council on the Harrow Road.
»read full article


Newington Green, N16
Newington Green is a road, open space and neighbourhood on the border between Islington and Hackney Appearing in the Domesday Survey of 1086, the main activity for centuries was agriculture - latterly growing hay for nearby London.

In the 16th century, the area became connected to the court of Henry VIII. The king reputedly used a house on the south side of the Green and in 1523 a resident of the north side of the Green, in Brook House, was the future 6th Earl of Northumberland, Henry Percy. He was noted for his role in the affairs of Anne Boleyn. Brook House was later demolished, renamed Bishopâs Place, and divided into tenements.

The area became the home of English Dissenters during the 17th century. They moved to places tolerant of them and one such place was Newington Green. A dissenting academy was set up on north of the Green, run by Charles Morton. One of the academyâs students was Daniel Defoe, the writer famous for his novel Robinson Crusoe. Another pupil was Samuel Wesley, father of John Wesley.

One of the most notable resi...
»more

The station is now managed by London Overground, which also operates all services from the station.
»read full article

The original street dates from around 1829 and like other streets of similar name, commemorates Wellingtonâs 1815 victory. The whole area was redeveloped for the Pleydell Estate in 1965.
»read full article


Akenside Road, NW3
Akenside Road is a street named after a famous local resident. Dr Mark Akenside (1721 â 1770) was an English poet and physician who lived and had his medical practise at North End, Hampstead.

Akenside was best known for his poem The Pleasures of Imagination, an eclectic philosophical essay that takes as its starting point papers on the same subject written by Joseph Addison for The Spectator.

Victoria Coach Station was opened at its present site in Buckingham Palace Road in 1932, by London Coastal Coaches, a consortium of coach operators. The building is in a distinctive Art Deco style, the architects for which were Wallis, Gilbert and Partners. In 1970 the coach operatorsâ association which managed the station became a subsidiary of the National Bus Company.

In 1988, ownership of Victoria Coach Station Limited was transferred to London Transport. In 2000, Transport for London was formed and took over the station.

The freeholder of the site, Grosvenor Group, announced in 2013 that it wishes to redevelop the site and relocate the station elsewhere in London. However, the building was listed at Grade II by English Heritage in 2014.
»read full article


The Athenaeum Hotel
The Athenaeum is a family-owned five-star hotel overlooking Green Park. Hope House was built at 116 Piccadilly in 1849/50 by Henry Pelham-Clinton, the 6th Duke of Newcastle. The name Athenaeum first appears around 1864 when the house was bought by the Junior Athenaeum Club. The house was redeveloped in the 1930s as an art deco apartment block, still called the Athenaeum.

In 1971 the Rank Organisation purchased the 1930s Athenaeum Court apartment block, opening it as The Athenaeum Hotel after a two-year refurbishment.
»read full article

Deptford Ferry Road was squeezed between the Canadian Cooperage and the Britannia Dock - the latter was extensive used for maintenance and repairs of shipping.

After having been sawmills and a joinersâ shop, the Canadian Cooperage was the name for the works of the Guelph Patent Cask Company Ltd, comprising of a range of one- and two-storey buildings. They burned down in 1900 and were replaced by a cask store, warehouse and mill, made of corrugated-iron.

The few houses in the street were squeezed between industrial sites and had become slums by 1899.

Although plans for redevelopment drawn up in 1916 by Ironmongersâ surveyor George Hubbard, the First World War saw these put on hold.

Behind the houses, Totnes Cottages were demolished in 1936. Totnes Terrace (renamed Mast House Terrace) was destroyed by bo...
»more

Many large houses were built in the street during the 17th and 18th centuries and lived in by those connected to the maritime trade.

By the twentieth century the street had became a slum and post-war, new housing was built.
»read full article


Baden-Powell House
Baden-Powell House is a Scouting hostel and conference centre built as a tribute to Lord Baden-Powell, the founder of Scouting.. The building committee, chaired by Sir Harold Gillett, Lord Mayor of London, purchased the site in 1956, and assigned Ralph Tubbs to design the house in the modern architectural style. The foundation stone was laid in 1959 by World Chief Guide Olave, Lady Baden-Powell, and it was opened in 1961 by Queen Elizabeth II. The largest part of the Â£400,000 cost was provided by the Scout Movement itself. Over the years, the house has been refurbished several times, so that it now provides modern and affordable lodging for Scouts, Guides, their families and the general public staying in London. The building also hosts conference and event space for hire.


Wormholt Farm
Wormholt Farm existed until the First World War. The name âWormeholtâ is a term referring to snake-infested woodland in old English. The name was first used in 1189 after the woodland was cleared. The land became part of the Manor of Fulham and owned by the Bishops of London. The manor then descended to become Wormholt Barns.

For 200 years from 1548, Wormholt was leased to the Duke of Somerset. By the beginning of the seventeenth century, a family called Atley was running it but the poor quality of most of the land led to frequent changes of tenancy.

In the nineteenth century Wormholt Barns Manor was split between Eynham Farm and Wormholt Farm.

A survey of 1833 described the soil of Wormholt Farm as "strong loam, making good grazing fields near Uxbridge Road, but towards Wormholt Wood Scrubs it becomes too stiff and too wet in winter." These soil characteristics determined the eventual use of the land. The northern areas of the farm remained as arable and grazing almost to the end b...
»more


Middlesex Arms
On the north side of Bignallâs Corner was the Middlesex Arms. Bignalls Corner - now the site of South Mimms services - existed before the M25/A1(M) junction obliterated the scene.

On the junction was the Middlesex Arms. The pub had been built as a road house in 1931 but was demolished in 1973 to make way for the A1(M). Run by landlords Gordon and Hilda, there was lorry driversâ overnight accommodation next to it. Drivers used to sleep in bunks four to a room.

The motel of the other side of the junction was a well known haunt for âladies of the nightâ who earned a living from the passing lorry drivers.

Further north up the A1 was the Budgie transport cafe, immortalised in the TV series of the same name. Also beside the A1 was the eventually abandoned and derelict âSan Marinoâ which had a swimming pool in the back.
»read full article

In 1754 the Lane was called Filcaps Lane after Filcaps Farm which stood on its north side. Caryâs Map of Middlesex from 1789 shows it as Chace Lane, and the Edmonton Enclosure Award of 1801 calls it Old Park Road since it formed the southern boundary of Old Park. Henrietta Cresswell in 1912 called it Dog Kennel Lane - a document of 1721 refers to the cutting down of an oak tree near the dog kennel on the Chase.

A builder Richard Metherell arrived in London from Devon to London in the 1870s. He formed a company - R. Metherell and Son -...
»more


Old Park View, EN2
Old Park View was the home of the Beatlesâ "Mean Mr. Mustard" Enfield Old Park was located in what is now Enfield and mentioned in the Domesday Book as being held by Geoffrey de Mandeville. Much of the Park is now built over as the suburb of Grange Park.

The Old Park was located around the site of an Iron Age hill fort. It was possibly a hunting park before the time of the Domesday Book and lasted as such until the 18th century.

From the 15th century and until the Civil War, the Old Park became royal property as part of the Duchy of Lancaster. Queen Elizabeth I often visited Enfield staying in a house at the border of the park.

In the early 17th century, the New River was laid through part of the Park.

In 1777, all of Enfield Chase was inclosed and came under several owners, including the then owner of the Park, Samuel Clayton. New roads such as Green Dragon Lane were laid out and the area became agricultural. In 1893 and 1895, Enfield Golf Club and Bush Hill Golf Club undertook long le...
»more