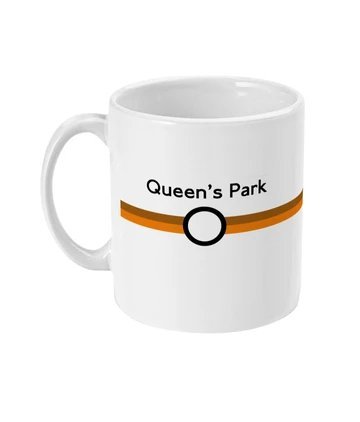 Queen's Park, like much of Kilburn, was developed by Solomon Barnett. The two-storey terraced houses east of the park, built between 1895 and 1900, typically have clean, classical lines. Those west of the park, built 1900â05, tend to be more Gothic in style. Barnett's wife was from the West Country, and many of the roads he developed are named either for places she knew (e.g. Torbay, Tiverton, Honiton) or for popular poets of the time (e.g. Tennyson). The first occupants of the area in late Victorian times were typically lower middle class, such as clerks and teachers. Queen's Park is both demographically and architecturally diverse. The streets around the park at the heart of Queens Park are a conservation area.

Queen's Park station was first opened by the London and North Western Railway (LNWR) on 2 June 1879 on the main line from London to Birmingham.

Services on the Bakerloo line were extended from Kilburn Park to Queen's Park on 11 February 1915. On 10 May 1915 Bakerloo services began to operate north of Queen's Park as far as Willesden Junction over the recently built Watford DC Line tracks shared with the LNWR. As of December 2013, no mainline services calling at the station and the Watford service has been transferred to London Overground.