Barlby Road is a street in North Kensington, London W10 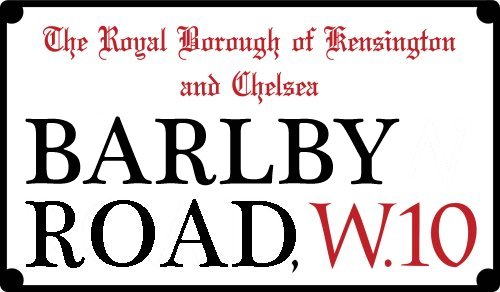 Barlby Road started its life as Edinburgh Road, a small cul-de-sac street with a school, running from Ladbroke Grove, beside the railway lines towards Old Oak Common.

Today the start of Edinburgh Road can still be seen in Barlby Road, but it used to be of cobbles and tarmac whereas now it is part of a small concreted car park for the occupants of houses.

In 1902, five acres of land were quickly bought for the Clement Talbot Motor Works in North Kensington. It was established in 1903 as the UKâs first purpose-built car factory. The workshops, built in brick with the latest saw-tooth roof line liberally glazed to provide the maximum natural light, were equipped with the most modern machine tools from every part of the world.

Edinburgh Road was extended to provide access to the south front of the works and it was almost immediately renamed Barlby Road.

Barlby Road was then extended to connect Ladbroke Grove with North Pole Road and Scrubs Lane, providing a through road.