Abbey Road has a name derived from the Cistercian abbey of Stratford Langthorne.

The abbey was founded about the year 1135 by Walter de Montfichet. It was a âdaughter houseâ of the monastery of Savigney, France. The Cistercian Monks here were known as the âwhite monksâ due to their white habits. The pathway which is now Abbey Road may even predate the abbey - it became a route from the church in West Ham Church to the abbey.

The abbey had a particular responsibility for the upkeep of the nearby bridge over the River Lea.

Sir Hubert Llewellyn Smith wrote a history of East London in 1939 and discussed the nursery rhyme âLondon Bridge Is Falling Downâ. The verses in the rhyme about repairing the bridge with bread, iron, gold and silver applied to the Lea bridge nearby he proposed as the monks used these very items in their time.

Henry VIII dissolved the abbey and the duty to drain the marsh was passed to the new owners of the lands that once belonged to the abbey.

Abbey Road (by then Abbey Lane) was cut in half during the 19th century when the Eastern Counties and Thames Junction railway was built.

The Adam and Eve inn was built on the site of the old Abbey as was industry.

In the 1980s, with the upcoming building of the Jubilee Line and a depot, archaeologist took a chance to examine the old abbey grounds. 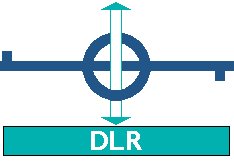 Not a zebra crossing in sight.

Abbey Road DLR station is built on the original route of the Eastern Counties and Thames Junction Railway which opened between Stratford and Canning Town stations in 1846. The line became part of what is now known as the North London Line in 1979. The Eastern Counties and Thames Junction Railway had four tracks over this section of route. The western pair were redeveloped as part of an extension to the London Undergroundâs Jubilee Line in 1999 and the eastern pair, which carried the North London Line service, were cut back at Stratford in 2006. The tracks were converted for use as part of the Docklands Light Railway.

The area between Canning Town and Stratford has been identified for major regeneration and new development as part of the Lower Lea Valley. The street that it serves is named after the nearby Stratford Langthorne Abbey.

The station is nowhere near the other, better-known Abbey Road of Beatles fame, with the celebrated zebra crossing near St Johnâs Wood tube station. Signs directing travellers to the right station are posted, complete with references to The Beatlesâ hits.