Breakspear Road North is one of the streets of London in the UB9 postal area. 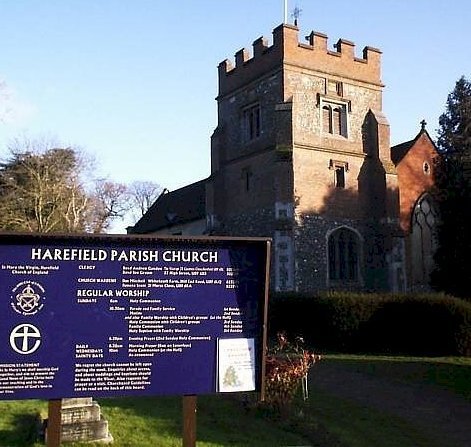 Harefield is the only sizeable village in what was Middlesex that remains separate from the London sprawl.

Before the Norman conquest of England Harefield belonged to Countess Goda, the sister of Edward the Confessor. Her husbands were French, Dreux of the Vexin and Count Eustace of Boulogne.

Following the Norman conquest, ownership of Harefield passed to Richard FitzGilbert, the son of Count Gilbert of Brionne. It was listed in the Domesday Book as comprising enough arable land for five ploughs, with meadow land only sufficient for one plough. Woodland areas in Middlesex were registered in the number of pigs which could be supported there; Harefield had 1200, the second highest in the Hundred of Elthorne (to Ruislip, with 1500). Ten villeins (tenants) are also counted; they held their land freely from the lord in exchange for rent payments and labour. By the 12th or 13th century their land is believed to have passed back to the lord and become unfree. There were also seven bordars (poorer tenants) with five acres each, while one had three. In addition, three cottars, who owned a cottage and garden, also feature.

Harefield was eventually split into the main manor of Harefield, and the two smaller submanors of Brackenbury and Moorhall. It had been owned by the Clares, descended from Richard FitzGerald, before passing to the Batchworths by 1235. In turn, the Swanlord family took possession in 1315. By 1446, the Newdigate family owned Harefield - they still owned some land in the 1920s. John Newdigate exchanged most of his land in 1585 with the Chief Justice of the Court of Common Pleas, Sir Edmund Anderson.

The Grand Junction Canal had opened in 1797 and industry came to Harefield and Uxbridge as a result; the copper mills opened in 1802.

The Napoleonic Wars were followed after 1815 by an economic depression, which held back industrial growth for a time. The coming of peace also probably reduced the demand for copper from the works. In 1851 the copper mills employed only 86 people. By 1871 the mills had turned over to paper making and employed about 40 people. In the 1830s much of west Middlesex changed to hay farming, which was less labour intensive than arable.

During World War I, Harefield Park was used as an Australian military hospital. The bodies of the servicemen who died there were buried with full military honours within the graveyard of St. Mary's Church; this area, which also included the ground where the Harefield Place building stood, became a military cemetery.

The village fête is held annually in July.