Great Portland Street forms the boundary between Fitzrovia to the east and Marylebone to the west.

Different owners and interests influenced the initial development of the area and affected the street layout and character. Edward Harley â Earl of Oxford and Mortimer, was responsible for the development of the Portland Estate, which commenced with Cavendish Square in 1717 and grew north and east. Great Portland Street's name is derived from the estate and several other street names in the area are related to the area's ownership, albeit less obviously.

Although the land up to Great Titchfield Street was controlled by the Portland Estate, other estates developed nearby land simultaneously. The Berners family who owned land just to the east of Great Portland Street, developed from Wells Street and Rathbone Place in the mid-18th century. At the same time the Middlesex Hospital expanded on land on a 99-year lease around Mortimer Street, encroaching on Riding House and Cleveland Streets. The proximity of unrelated developers with different agendas explains the unusual pattern of street grids centred on Great Portland Street, where several east-west streets terminate or originate.

Great Portland Street runs straight from north to south through the grid of streets. The layout, combined with its width and the concentration of shops along its length, means it has for a long time been a local centre and thoroughfare, connecting the residential areas around Regent's Park with the West End. It has also resulted in it becoming a divider, emphasising the contrasting areas to either side. To the east,are artistic areas such as Fitzrovia, which have historically been less well-to-do than the west, with its grand parade of Portland Place, residential areas for the gentry, and doctors and medical institutions on Harley Street.

Development of the estate was gradual but particularly so on Great Portland Street. This had an effect during its redevelopment in the late-19th/early-20th centuries when rebuilding was dictated by the expiration of individual 99-year leases, and is evident in the buildings in existence today.

The most coherent element to the architecture is the predominance of Edwardian buildings to the north and Victorian buildings towards Oxford Street, particularly noticeable when there has been occasional consolidation of plots, leading to consistent faÃ§ades above street level such as in the block between Clipstone and Carburton Streets. The trend of period groupings is another result of the slowness of the first development. As buildings in the south were built earlier than those in the north, their leases expired earlier, setting off a wave of redevelopment which meant that rebuilding in the south took place in the late-Victorian era, whilst that in the north was delayed until the Edwardian.

The Blitz made it necessary for further re-building after the war, although the damage incurred along the street was not particularly extensive so there are few modern buildings, and although the aesthetic today is a jumble of architectural styles and eras, the overall feel is that of an historic street. 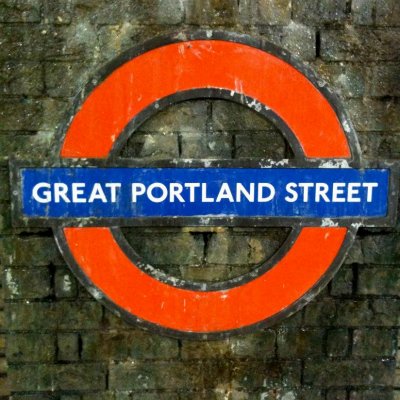 It was opened on 10 January 1863 as Portland Road, renamed Great Portland Street and Regents Park in 1923 and changed to its present name on 1 March 1917.

The current structure was built in 1930 on a traffic island on the Marylebone Road at its intersection with Great Portland Street and Albany Street. Its construction is a steel framed cream terracotta clad exterior, with the perimeter providing shops and originally a car showroom with office space over the station. Great Portland Street was at a major sales location for the motor industry. It was designed by the architect C.W. Fowler and Grade II listed in January 1987.

Local points of interest include Regent's Park, and the Post Office Tower. The station is very close to Regent's Park station, which is on the Bakerloo line.

The station is across the street from the main building of International Student House, a student residence and hostel and is also near Harley Street medical district, famous for its doctors and surgeons.

Great Portland Street itself forms the boundary between Fitzrovia to the east and Marylebone to the west. Like the better known Portland Place which runs parallel with it to the west, Great Portland Street was developed by the Dukes of Portland, who owned most of the eastern half of Marylebone in the 18th and 19th centuries. It is now a mixed use street with buildings of mainly five to eight storeys. There are some offices and a number of blocks of mansion flats.