As late as 1854, this area was still agricultural. âThe Holliesâ, east of Crouch Hill, was sold off between 1864 and 1867 in 20 plots as Holly Park but was not developed until the 1870s. By 1878 residents founded the âHolly Park Protection Associationâ.

The Holly Park Methodist Church was founded in 1881 by the Rev. Morley Punshon and Sir Francis Lycett. The architect was Elijah Hoole. The church with seating for 1000 opened in 1882 - the lecture hall and school classrooms, considered by Mr.Hoole to be his best work, opened in 1886. In 1962 a modern church was erected on the
site.

The Holly Park Estate was built between 1951-2 and named after the large villas that were once there -’The Hollies’, ’Tregaron’ and others. 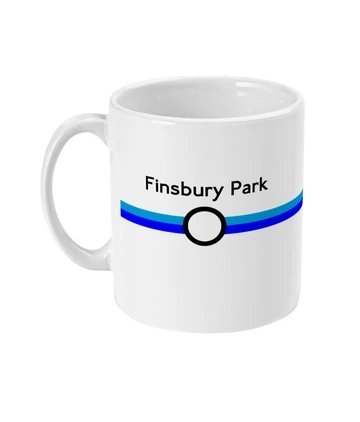 Finsbury Park is an area in north London which grew up around an important railway interchange near the borders of the London Boroughs of Islington, Haringey and Hackney.

Finsbury Park is not to be confused with [Finsbury">Finsbury] which is 5.3 km further south in the London Borough of Islington.

The area is centred on Finsbury Park station, a major bus, rail and tube interchange near the southern end of the public park of the same name.

The surrounding area has a cosmopolitan feel, as reflected by the wide variety of shops and establishments on Seven Sisters Road, Blackstock Road and Stroud Green Road. The North London Central Mosque (formerly the Finsbury Park Mosque), which drew attention for extremist activity before a change in leadership in 2003, is located here. Arsenal Football Clubâs Emirates Stadium is nearby.

Finsbury Park station first opened on 1 July 1861 and was originally named Seven Sisters Road (Holloway). It is on the route of the East Coast Main Line from Kingâs Cross to the north of England and Scotland. The southern section of this was built in stages during the 1840s and early 1850s by the Great Northern Railway (GNR). Tracks were first laid through Finsbury Park in 1850 to the GNRâs temporary terminus at Maiden Lane just north of the permanent terminus at Kingâs Cross (which opened in 1852).

Soon after the first station opened, the Edgware, Highgate and London Railway (EH&LR) began construction of a line from Finsbury Park to Edgware. The GNR took over the EH&LR shortly before its opening on 22 August 1867. The station was given its current name Finsbury Park on 15 November 1869.

The Great Northern & City Railway (GN&CR) was an underground railway planned to provide a tunnel link between Finsbury Park and Moorgate in the City of London as an alternative London terminus for GNR trains. The tunnels were constructed with a large diameter to accommodate this service but a dispute between the two companies prevented the GN&CR connecting its tunnels to the GNR platforms. The GN&CR tunnels, instead, terminated beneath the main line station without a connection to the surface and the line operated as a shuttle between Finsbury Park and Moorgate. This line opened on 14 February 1904.

The Great Northern, Piccadilly and Brompton Railway (GNP&BR) (now London Undergroundâs Piccadilly line) opened on 15 December 1906 between Finsbury Park and Hammersmith in west London. The tube railway originated as the Great Northern and Strand Railway (GN&SR) in 1897 and was initially supported by the GNR as a means of relieving congestion on its main line into Kingâs Cross by constructing a tube line under the GNRâs tracks from Alexandra Palace to Kingâs Cross and then to the Strand. The GN&SR was taken over in 1901 by a consortium led by Charles Yerkes before any work had been carried out and the section north of Finsbury Park was cancelled. The GN&SR was merged with the Brompton and Piccadilly Circus Railway to form the GNP&BR. It was constructed with the smaller-diameter tube tunnels common to other underground railways being constructed in London at that time. Its platforms were constructed by the GNR parallel with the GN&CRâs platforms beneath the main line station. The Piccadilly Line was later extended northwards.

London Underground had for many years been planning a new route across central London to relieve pressure on the central sections of the Piccadilly and Northern lines. In the early 1960s the plans were consolidated into a single plan for the Victoria line. The route of the new line was designed to provide the maximum number of interchanges with other Underground and British Rail lines as possible, and Finsbury Park was an ideal candidate for this. The first section of the Victoria line, including Finsbury Park, opened between Walthamstow Central and Highbury & Islington on 1 September 1968.