Hampstead station pictured at its opening in 1907 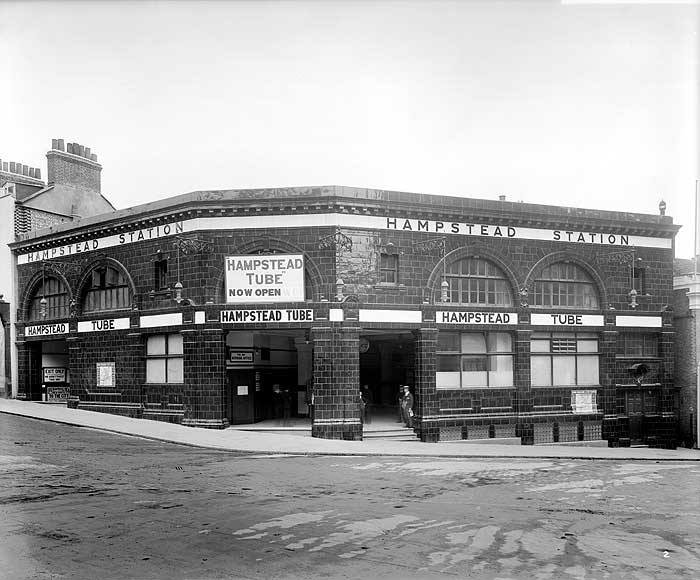 Opening of Hampstead station
Designed by architect Leslie Green the station was opened on 22 June 1907 by the Charing Cross, Euston & Hampstead Railway. Located at the junction of Heath Street and Hampstead High Street, the name Heath Street was proposed for the station before opening: indeed, the original tiled station signs on the platform walls still read Heath Street.

Hampstead is on a steep hill and the station platforms are the deepest on the London Underground network, at 58.5 metres (192 ft) below ground level. It has the deepest lift shaft on the Underground at 55 metres (180 ft) feet which houses high-speed lifts. There is also a spiral emergency staircase of over 320 steps.

Hampstead though now considered an integral part of London, has retained much of its village charm.

Hampstead is on a steep hill and the tube station platforms are the deepest on the London Underground network, at 58.5 metres below ground level. It has the deepest lift shaft on the Underground.

Although early records of Hampstead itself can be found in a grant by King Ethelred the Unready to the monastery of St. Peter's at Westminster (AD 986) and it is referred to in the Domesday Book (1086), the history of Hampstead is generally traced back to the 17th century.

Trustees of the Well started advertising the medicinal qualities of the chalybeate waters (water impregnated with iron) in 1700. Although Hampstead Wells was initially successful, its popularity declined in the 1800s due to competition with other London spas. The spa was demolished in 1882, although a water fountain was left behind.

Hampstead started to expand following the opening of the North London Railway in the 1860s (now on the London Overground), and expanded further after the tube station opened in 1907.