The Former Middlesex Session(s) House or the Old Sessions House is a large building on Clerkenwell Green.

It was formerly in the public sector as a courthouse but now used as a membersâ club for business networking.

It was built over the four years to either side of 1780, when it opened, for the Middlesex Quarter Sessions of the justices of the peace, replacing nearby Hicks Hall which had fallen into disrepair. Hicks Hall opened in 1611 had stepped into many of the lesser functions of the Old Bailey.

The Sessions House served as the most urban and senior magistrates centre and as a nascent administrative centre of Middlesex (which included Westminster and Islington for example) until county councils were created for Middlesex and London in 1889. This court and the old City and Liberty of Westminster Magistrates own âGuildhallâ (built 1805) were in the County of London. London County Council continued its use for magistrates in its area until sale in 1921 when remaining business was transferred to the Sessions House in Newington Causeway. Meanwhile, Middlesex administration saw a much-expanded burden of providing emergency services, a buildings and planning department, sanitation and road planning until its 1965 abolition, and so these functions took place in the former Magistratesâ Guildhall as the Middlesex Guildhall which was rebuilt twice and has been finally reconfigured to revert to a judicial use: the Supreme Court of England and Wales.

From 1931 to 1973 the Old Sessions House served as the headquarters of Avery Weighing Machines, manufacturers of weighing-machines and scales. After their departure the building fell into further disrepair until in 1978 it was acquired and restored by a masonic trust and the following year opened as the London Masonic Centre, incorporating conference and social facilities.

In 2013 it was announced that it was to be sold to the proprietors of Home House, a private membersâ club in Londonâs West End, to be a Clerkenwell Club in an area with a significant technology sector. 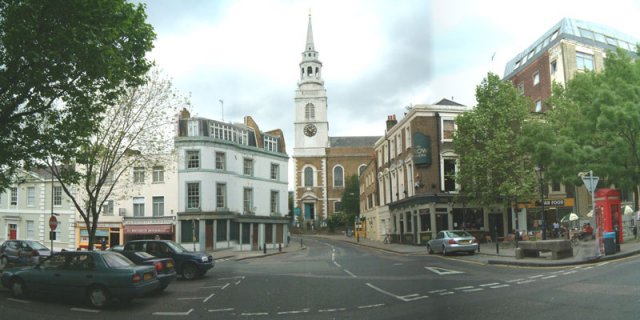 Clerkenwell was once known as London's Little Italy because of the large number of Italians living in the area from the 1850s until the 1960s.

Clerkenwell took its name from the Clerks' Well in Farringdon Lane. In the Middle Ages, the London Parish clerks performed annual mystery plays there, based on biblical themes. Part of the well remains visible, incorporated into a 1980s building called Well Court.

Before Clerkenwell became a built-up area, it had a reputation as a resort a short walk out of the city, where Londoners could disport themselves at its spas, of which there were several, based on natural chalybeate springs, tea gardens and theatres. The present day Sadler's Wells has survived as heir to this tradition.

The Industrial Revolution changed the area greatly. It became a centre for breweries, distilleries and the printing industry. It gained a special reputation for the making of clocks and watches, which activity once employed many people from around the area. Flourishing craft workshops still carry on some of the traditional trades, such as jewellery-making. Clerkenwell is home to Witherby's, Europe's oldest printing company.

After the Second World War, Clerkenwell suffered from industrial decline and many of the premises occupied by the engineering, printing publishing and meat and food trades (the last mostly around Smithfield) fell empty. Several acclaimed council housing estates were commissioned by Finsbury Borough Council. Modernist architect and Russian Ã©migrÃ© Berthold Lubetkin's listed Spa Green Estate, constructed 1943â1950, has recently been restored. The Finsbury Estate, constructed in 1968 to the designs of Joseph Emberton includes flats, since altered and re-clad.