Biba was a London fashion store of the 1960s and 1970s, started and primarily run by the Polish-born Barbara Hulanicki with help of her husband Stephen Fitz-Simon.

Barbara Hulanicki worked as a fashion illustrator after studying at Brighton Art College in the late 1950s. She married advertising executive Stephen Fitz-Simon and they soon opened a mail order clothing company that she named Bibaâs Postal Boutique. Biba was the nickname of her younger sister Biruta.

The first store, in Abingdon Road in Kensington, was opened in September 1964.

The shopsâ main appeal was what was seen on TV on Friday night could now be bought on Saturday and worn that night. As the Biba style (tight cut skinny sleeves, earthy colours) and logo became more and more recognisable, the more and more people wanted to be seen in it.

The second store at 19-21 Kensington Church Street opened in 1965 and a series of mail-order catalogues followed in 1968, which allowed customers to buy Biba style without having to come to London.

The next move, in 1969, was to Kensington High Street, into a store which previously sold carpet. On 1 May 1971 a bomb was set off inside the store by The Angry Brigade.

In 1973 with the backing of Dorothy Perkins and British Land, the store moved to the seven-storey Derry & Toms department store, which immediately attracted up to a million customers weekly, making it one of the most visited tourist attractions in London.

There were different departments, and each floor had its own theme, such as a childrenâs floor, a floor for men, a book store, a food market, and a "home" floor which sold items such as wallpaper, paint, cutlery, soft furnishings and even statues. The overall design was produced by Whitmore-Thomas Partnership, run by artist/designers Steve Thomas (artist) and Tim Whitmore. Each department had its own logo or sign, which was based on the Biba logo and had a picture describing the department. These were commissioned by Thomas and Whitmore and designed by Kasia Charko.

The store had an Art Deco-interior and non-traditional displays, such as a giant Snoopy and his doghouse in the childrenâs department, where merchandise based on the Peanuts comic strip was sold. The Biba Food Hall was also designed ingeniously, each part being aimed at one particular kind of product; a unit made to look like a dog (based on Hulanickiâs own dog, a Great Dane named Othello) consisted of dog food; a huge baked beans tin can consisted of only tins of Baked beans; a can of "Warholâs Condensed Soup" etc., all foods having individual innovative units. Also at the new "Big Biba" was "The Rainbow Restaurant", which was located on the fifth floor of the department store and was destined to become a major hang-out for rock stars, but which was not solely the reserve of the elite.

After disagreements with the Board over creative control, Hulanicki left the company and, shortly afterwards in 1975, Biba was closed by the British Land Company. The Dorothy Perkins shareholder decided that the Derry and Toms building that housed Big Biba was worth more than the ailing business itself. It sold the trademark to a consortium with no connection to Barbara Hulanicki.

Read the Biba entry on the Wikipedia... 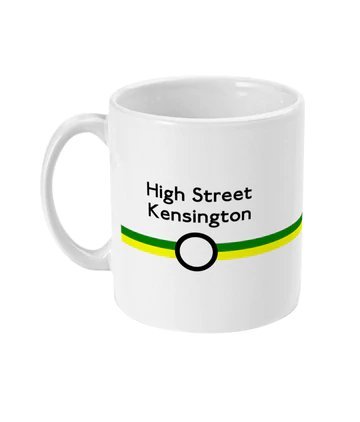 Kensington High Street is a road (forming part of the A315) in Kensington, west London.

Its western extremity is the eastern end of Hammersmith Road near Kensington (Olympia) station. From here, the road heads east-north-east, past the Commonwealth Institute and High Street Kensington tube station. It forms a junction which Kensington Church Street, which runs to the north, and then continues east to the south-west corner of Kensington Gardens, close by Kensington Palace. Eastward the road becomes Kensington Road.

The stretch between the Commonwealth Institute and Kensington Gardens is a popular shopping area, with chainstores and upmarket shops serving a wealthy catchment area. In 2005 House of Fraser announced that it is closing the 135 year old Barkers department store in the street, meaning that it will have no department stores left after the earlier closures of Pontings and Derry & Toms. The 75,000 square foot premises will be taken over by Whole Foods Market, the American owner of organic supermarket chain Fresh & Wild to become the UK’s first organic superstore.

High Street Kensington station, on the District Line, opened in 1868.