Montagu House at 22 Portman Square was a historic London house. 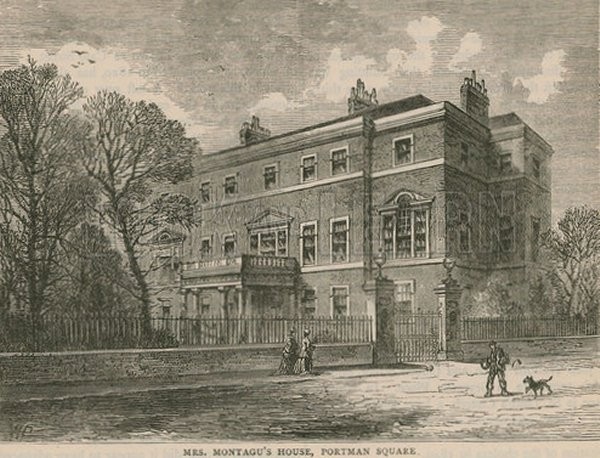 Montagu House, Portman Square
Occupying a site at the northwest corner of the square, in the angle between Gloucester Place and Upper Berkeley Street, it was built for Mrs Elizabeth Montagu, a wealthy widow and patroness of the arts, to the design of the neoclassicist architect James Stuart.

Construction began in 1777 and the house was completed in 1781, whereupon it became Mrs Montaguâs London residence until her death on 25 August 1800. The house was destroyed by an incendiary bomb in the Blitz of London and the site is now occupied by the Radisson SAS Portman Hotel.

Marylebone - so good they named it once but pronounced it seven different ways.

Marylebone is an area in the City of Westminster North of Oxford Street and South of Regents Park. Edgware Road forms the Western boundary. Portland Place forms the eastern boundary with the area known as Fitzrovia.

Marylebone gets its name from a church, called St Mary's, that was built on the bank of a small stream or bourne called the Tyburn. The church and the surrounding area later became known as St Mary at the bourne, which over time became shortened to its present form Marylebone.

Today the area is mostly residential with a stylish High Street. It is also notable for its Arab population on its far western border around Edgware Road.

Marylebone station, opened in 1899, is the youngest of London's mainline terminal stations, and also one of the smallest, having opened with half the number of platforms originally planned.

The underground station is served by the Bakerloo Line, opening on 27 March 1907 by the Baker Street and Waterloo Railway under the name Great Central (following a change from the originally-intended name Lisson Grove). It was renamed Marylebone in 1917.