The Greenwich Peninsula is bounded on three sides by a loop of the Thames, between the Isle of Dogs to the west and Silvertown to the east. 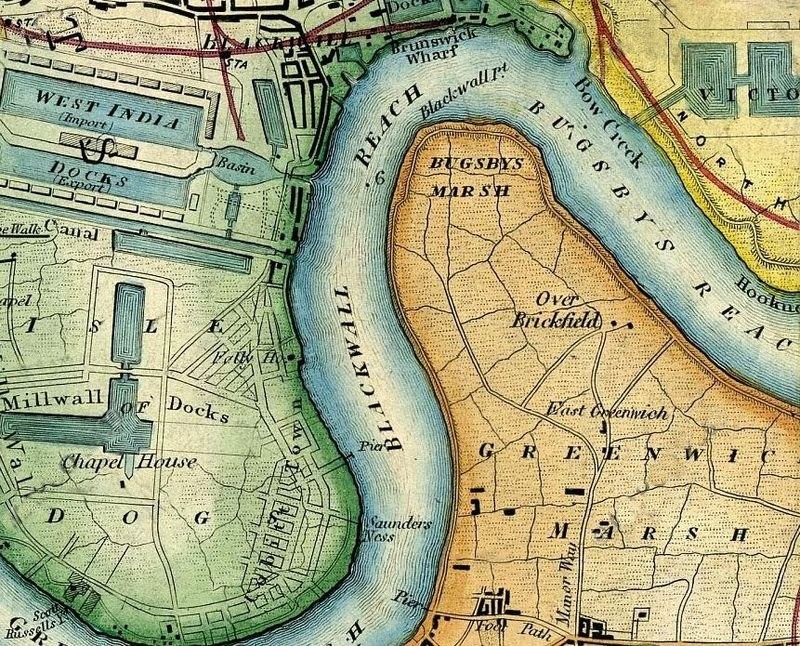 The peninsula was drained by Dutch engineers in the 16th century, allowing it to be used as pasture land. In the 17th century, Blackwall Point (the northern tip of the peninsula, opposite Blackwall) gained notoriety as a location where piratesâ corpses were hung in cages as a deterrent to other would-be pirates. In the 1690s the Board of Ordnance established a gunpowder magazine on the west side of the peninsula, which was in operation by 1695 serving as the governmentâs primary magazine (where newly-milled powder was stored prior to being distributed, on board specially-equipped hoys, to wherever it was needed). Alongside the magazine was a wharf, a proof house and accommodation for the resident Storekeeper. From the early 18th century, however, local residents began petitioning Parliament, asking for the magazine (and its dangerous contents in particular) to be removed; this eventually led to the establishment of a new set of Royal Gunpowder Magazines downriver at Purfleet, which was opened in 1765. By 1771 gunpowder was no longer stored at Greenwich (though the buildings remained in situ for some decades afterwards).

The peninsula was steadily industrialised from the early 19th century onwards. In 1857 a plan was presented to Parliament for a huge dock occupying much of the peninsula, connected to Greenwich Reach to the west and Bugsbyâs Reach to the east, but this came to nothing. Early industries included Henry Blakeleyâs Ordnance Works making heavy guns, with other sites making chemicals, submarine cables, iron boats, iron and steel. Henry Bessemer built a steel works in the early 1860s to supply the London shipbuilding industry, but this closed as a result of a fall in demand due to the financial crisis of 1866. Later came oil mills, shipbuilding (for example the 1870 clippers Blackadder and Halloweâen built by Maudslay), boiler making, manufacture of Portland cement and linoleum (Bessemerâs works became the Victoria linoleum works) and the South Metropolitan Gas companyâs huge East Greenwich Gas Works. Early in the 20th century came bronze manufacturers Delta Metals and works making asbestos and âMolassine Mealâ animal feed.

For over 100 years the peninsula was dominated by the gasworks which primarily produced town gas, also known as coal gas. The gasworks grew to 240 acres, the largest in Europe, also producing coke, tar and chemicals as important secondary products. The site had its own extensive railway system connected to the main railway line near Charlton, and a large jetty used to unload coal and load coke. There were two huge gas holders. Originally manufacturing gas from coal, the plant began to manufacture gas from oil in the 1960s. The discovery of natural gas reserves in the North Sea soon rendered the complex obsolete.

On the eastern shore was Blackwall Point Power Station; the original station from the 1890s was replaced in the 1950s by a new station which ceased operation about 1981. A large area including the site of the Victoria linoleum works later became the Victoria Deep Water Terminal in 1966, handling container traffic.

At the southern end of the peninsula Enderbyâs Wharf was occupied by a succession of submarine cable companies from 1857 onwards, including Glass Elliot, W T Henley, Telcon, Submarine Cables Ltd, STC, Nortel and Alcatel.

Closure of the gasworks, power station and other industries in the late 20th century left much of the Greenwich Peninsula a barren wasteland, much of it heavily contaminated.

In the early years of the 21st century, surviving industries were mainly concentrated on the western side of the peninsula, between the river and the A102 Blackwall Tunnel southern approach road. They included Alcatel, a Tunnel Refiners/Amylum glucose plant (from 1976 until about 2008 part of Tate & Lyle) which closed in 2009, and two large marine aggregate terminals on the Delta Metals and Victoria Deep Water Terminal sites. One of the two gas holders also remains.

Public and private investment since the early 1990s has brought about some dramatic changes in the peninsulaâs topography. In 1997 the national regeneration agency, English Partnerships, (now named the Homes and Communities Agency) purchased 1.21 square kilometres of disused land on the peninsula. The agencyâs investment of over Â£225m has helped to enhance the transport network and create new homes, commercial space and community facilities and to open up access to parkland along the river.

In addition to the construction of the Millennium Dome, new roads were built on the eastern side of the Peninsula in anticipation of new developments. New riverside walkways, cycle paths and public artworks were also created, including Antony Gormleyâs Quantum Cloud and A Slice of Reality, a work by Richard Wilson.

North Greenwich tube station on the Jubilee line opened in 1999. It is one of the largest London Underground stations and also has a bus station. The North Greenwich Pier offering commuter boat service to other parts of London, both east and west, is located on the Thames just to the east of the tube station.

Transport for London constructed a cable car over the River Thames just before the 2012 Summer Olympics began.

The peninsula is being developed with new homes. 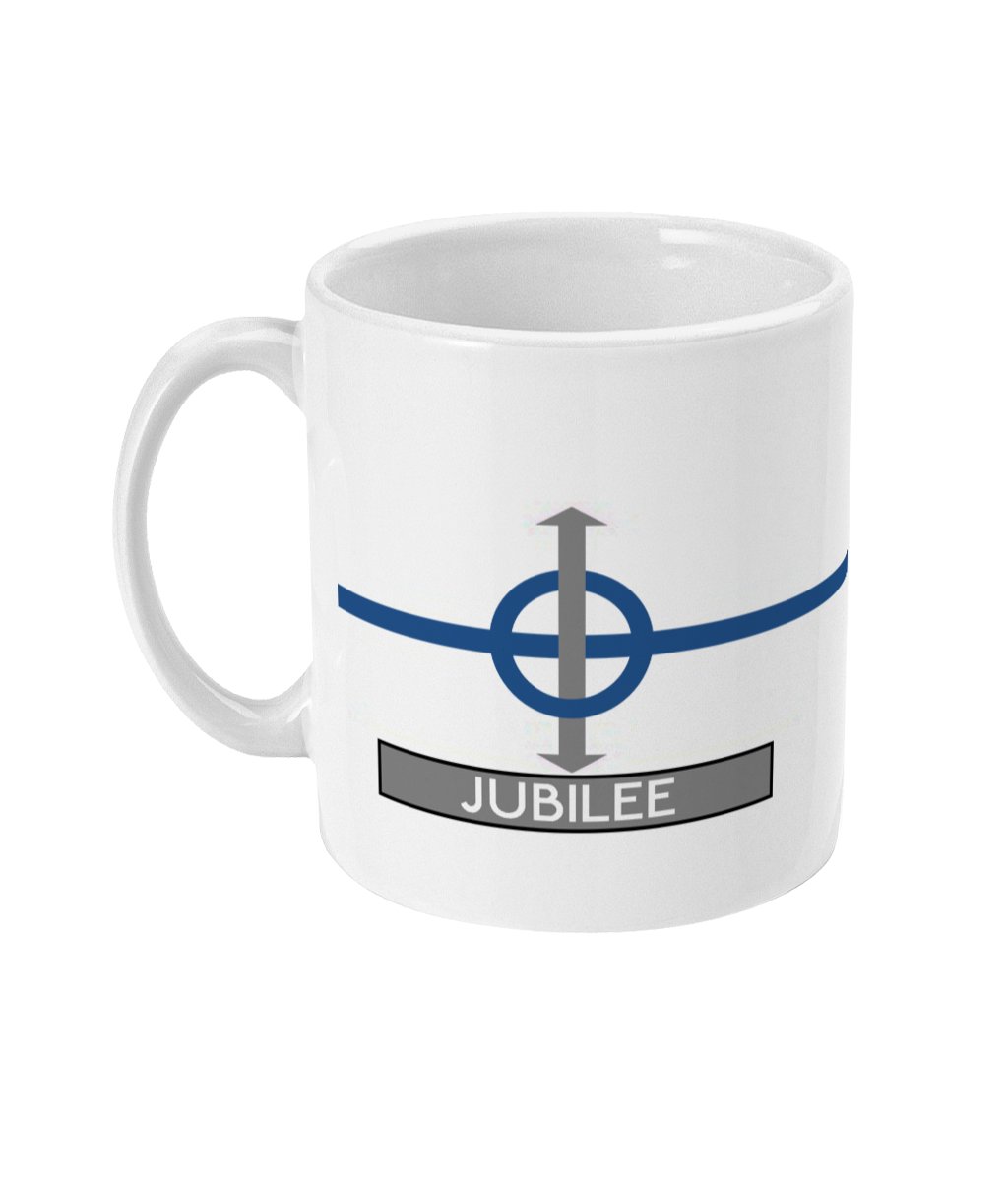 North Greenwich is a station on London Underground's Jubilee Line which opened on 14 May 1999.

North Greenwich is one of the largest stations on the Jubilee Line, capable of handling around 20 000 passengers an hour, having been designed to cope with the large number of visitors expected at the Millennium Dome (now The O2).

The striking blue-tiled and glazed interior, with raking concrete columns rearing up inside the huge underground space, was designed by the architectural practice Alsop, Lyall and StÃ¶rmer.