The oldest part of Talbot Road lies in London, W11. 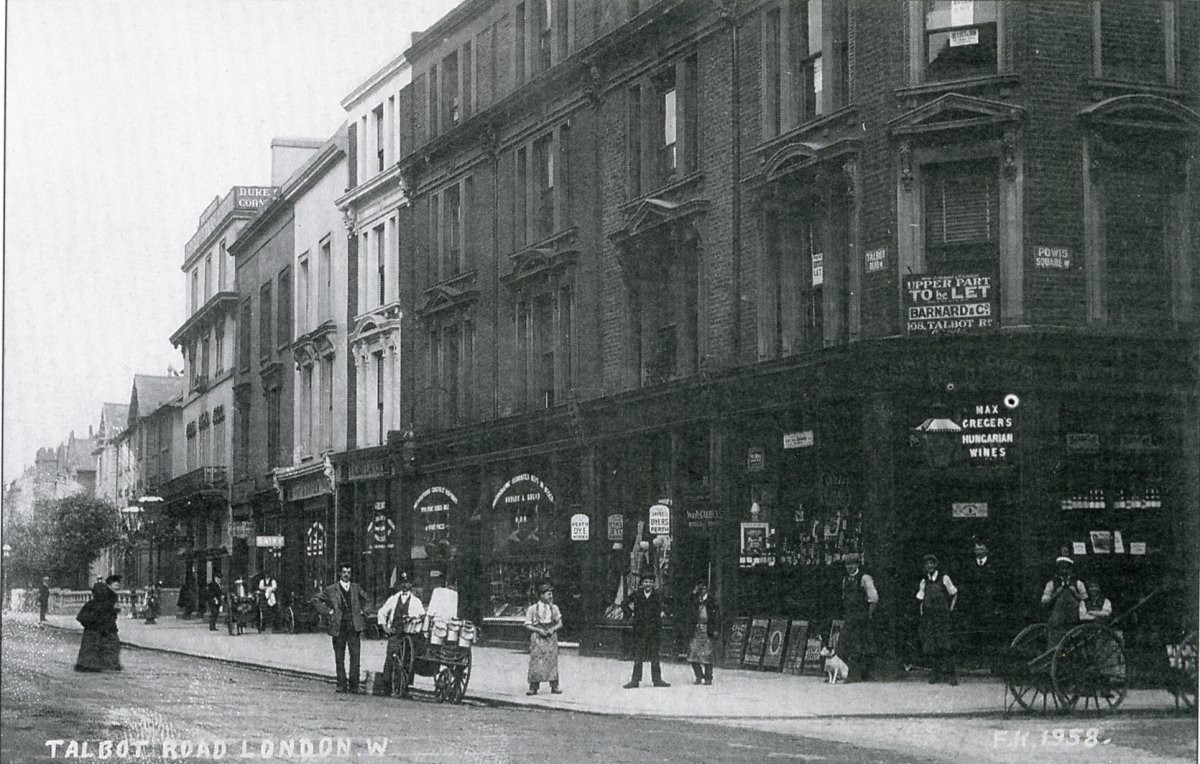 Talbot Road from the east corner of Powis Square 1900s featuring the site of Fullerton’s tailor’s/blues and the Globe bar.
Talbot Road began its life in the 1860s but it was events a century later that shaped it.

By the late 1950s about 7000 black people had settled in Notting Hill, mostly in the Colville area. In most accounts, conditions deteriorated after notorius landlord Peter Rachman handed over control of houses to black sub-landlords, and things really fell apart as his former henchmen tried to wring a profit out of the deteriorating slums. With most local pubs unwelcoming, West Indian hustlers developed their own scene consisting of various types of clubs. There were after-hours drinking clubs, basement/cellar-clubs for daytime gambling, rent parties, and the most famous, blues - clubs, dances or parties, named after the Blaupunkt radio-gramophone, rather than blues music.

Blues dance music went from jazz, calypso and Jamaican rhythmânâblues, through ska and rocksteady to dub reggae. The first is said to have been in the basement of Fullertonâs, the tailors on Talbot Road on the corner of Powis Square, where Duke Vin was the selector. Then Bajy opened a café and cellar-club next door (which must have become the Globe), and the Montparnasse was further along Talbot Road.

Around the corner on Powis Square, the Rachman basement flat of Michael de Freitas hosted a residency of the jazz pianist Wilfred Woodley. The Jamaican tailor Clifford Fullerton, who arrived on the Windrush in 1948 and set up shop on Talbot Road in the early 50s, has unusually fond memories of the rockânâroll years in his âMulti-racial North Kensingtonâ recollection: "The best times for the shop were the 50s. All the fellows wanted a handmade suit, mostly West Indians and we worked a lot for the Teddy boys too. At that time Teddy boys used to be well-dressed."

Blues clubs are now celebrated for transforming Notting Hill from a dreary slum into the heart of multicultural London, but at the time they were generally not appreciated. After the 1958 race riots stemmed from noise complaints about them, the clubs played an integral part in the formation of the first tenantsâ associations, the Profumo affair, and the drug counter-culture. West Indian club in âSapphireâ 1959.

At the height of the trouble in 1958, white rioters surged out of Notting Dale across Ladbroke Grove into Colville to besiege Rachmanâs black ghetto, smashing windows of blues clubs, West Indian houses and cafés. Molotov cocktails were thrown as some West Indians fought back from the Calypso club, on the corner of Ledbury and Westbourne Park Road, and Totobagâs café at 9 Blenheim Crescent.

The Globe bar at 103 Talbot Road was founded in the 1960s by the black actor Roy Stewart; who also ran a multi-racial gym-club round the corner at 32a Powis Square, set up before the riots. The celebrated body-builder/actor appeared in the James Bond films âDr Noâ and âLive and Let Dieâ, the Rolling Stonesâ âOne Plus One (Sympathy for the Devil)â, âLeo the Lastâ (on the site of Lancaster West estate) and âCarry Onâ films. In its heyday the Globe after-hours bar/restaurant was famously frequented by Beatles, Stones, Jimi Hendrix, Van Morrison and Bob Marley. Hendrix was reputedly last seen there the night he died in 1970.

Daley Thompson House on Talbot Road, west of the church, is named after the greatest local sport hero. The double gold medal winning decathlete was born in Notting Hill in 1958 and grew up in Colville Square off Talbot Road and attended Colville School on Lonsdale Road. The flats were named in his honour in 1984, as he won his second gold at the Los Angeles Olympics.

The Rough Trade indie record shop has been at number 130, since 1983, when it moved across Portobello Road from its original location at 202 Kensington Park Road. The Talbot Road shop had their own record label Wiiija, named after their postcode, and was famously visited by Kurt Cobain of Nirvana and Courtney Love as the indie post-punk scene spawned grunge.

Talbot Road from the east corner of Powis Square 1900s featuring the site of Fullerton’s tailor’s/blues and the Globe bar.
User unknown/public domain