Somewhere beneath the basement of 16 Frognal, NW3 two tributaries of the River Westbourne meet. 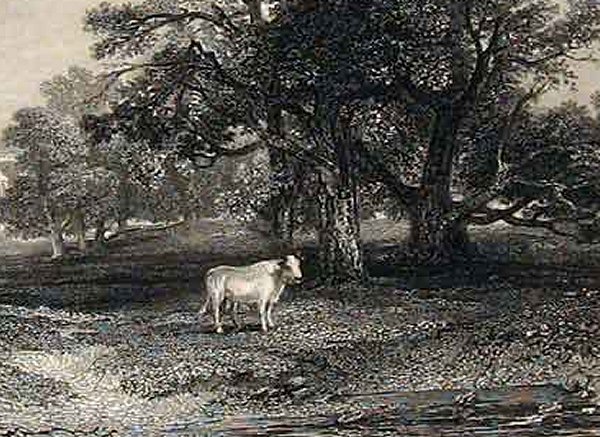 General 19th century print of cows beside a similar stream
The road called 'Frognal' follows the route of one of main branches of the River Westbourne - this branch being called the 'Kilbourne'.

Downstream it will flow through Kilburn, Bayswater and Knightsbridge - giving each of those places, indirectly, their names.

But up here in the hills of Hampstead, the infant river flows beneath modern residents of 19th century houses.

Below the house with the address of 16 Frognal, the lay the junction where the main Kilbourne stream, flowing downhill beside Frognal, met a smaller tributary which began in a boggy area beneath the future Netherhall Gardens.

This can be seen on the 1870 map where the marker shows the spot.

Further along its course, the Kilbourne will meet the Cannon Stream flowing down from Whitestone Pond and, combined, form the Westbourne.

Hampstead though now considered an integral part of London, has retained much of its village charm.

Hampstead is on a steep hill and the tube station platforms are the deepest on the London Underground network, at 58.5 metres below ground level. It has the deepest lift shaft on the Underground.

Although early records of Hampstead itself can be found in a grant by King Ethelred the Unready to the monastery of St. Peter's at Westminster (AD 986) and it is referred to in the Domesday Book (1086), the history of Hampstead is generally traced back to the 17th century.

Trustees of the Well started advertising the medicinal qualities of the chalybeate waters (water impregnated with iron) in 1700. Although Hampstead Wells was initially successful, its popularity declined in the 1800s due to competition with other London spas. The spa was demolished in 1882, although a water fountain was left behind.

Hampstead started to expand following the opening of the North London Railway in the 1860s (now on the London Overground), and expanded further after the tube station opened in 1907.