The Railway pub is a standard Victorian pub with a musical secret. 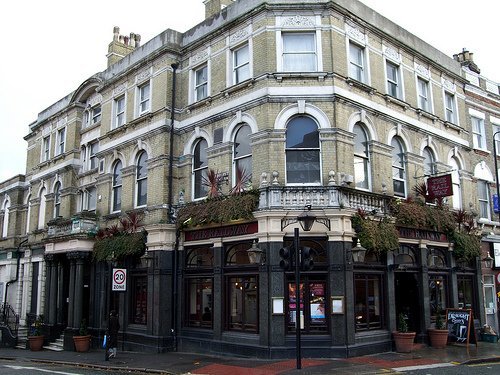 The Railway, West Hampstead
Returned to the original name of The Railway after a change to the Rat & Parrot for a few years it is located on the corner of Broadhurst Gardens and West End Lane.

In the legendary Klooks Kleek venue above the pub, Jimi Hendrix jammed on stage, Stevie Wonder played to packed crowds, Tom Jones drank and Eric Clapton had his guitar stolen there. The club was a key component of the capital's early 1960s - the Rolling Stones played and supergroup Cream recorded its first live album there.

Klooks was an old Victorian drawing room, some 20 metres square and unlike other venues had no stage at all.

In the 1970s, the club was renamed The Moonlight and U2 played their first gig outside Ireland there.

The venue is no longer used for music.