For more than 600 years a Christian church stood on the site of Adler Street, White Church Lane and Whitechapel High Street. St Mary Matfelon was the second-oldest church in Stepney, having been created as a chapel-of-ease for the local area in the 13th century. A new church was built on the site, largely paid for by Octavius Coope, in 1877.

On 26 August 1880, the new church was devastated by fire, leaving only its tower, vestry and church rooms intact. It was rebuilt, opening in 1882.

On 29 December 1940, a Nazi fire raid destroyed the church. It was left in disrepair until it was finally demolished in 1952. The site of the church became St Mary’s Gardens in 1966 and is now a public park called Altab Ali Park. An outline of the footprint of the church is all that remains of it.

The outside of the original church in the middle ages was whitewashed. Its bright white colour prompted locals to call it the ’white chapel’ which became the name of the area. 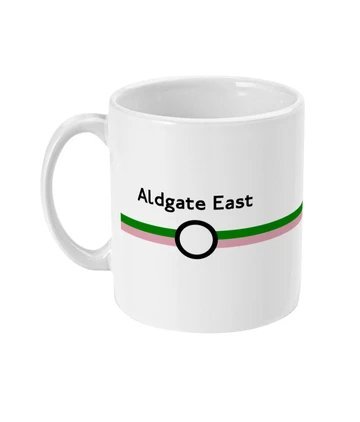 Since the station was built completely under a widened road, and was built after concrete had started to be used as a construction material, the platforms have a particularly high headroom. Combined with the late 1930s style of tiling typical of the stations of the then London Passenger Transport Board, the platform area of the station presents a particularly airy and welcoming appearance, unusual on the underground at the time of construction. The tiling contains relief tiles, showing devices pertinent to London Transport and the area it served, were designed by Harold Stabler and made by the Poole Pottery.