Portobello Farm House was approached along Turnpike Lane, sometimes referred to as Greenâs Lane, a track leading from Kensington Gravel Pits towards a wooden bridge over the canal. 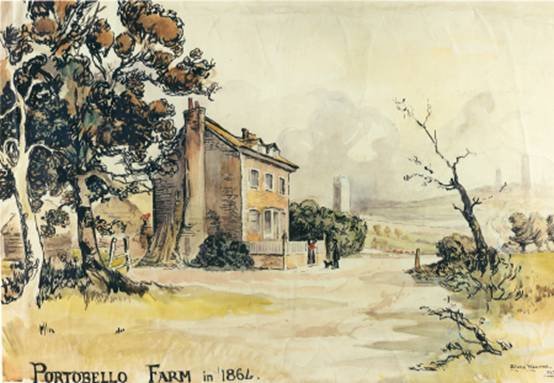 Picture of Portobello Farm, drawing by W.E.Wellings (Kensington & Chelsea Local Studies Archive)
In 1740, Portobello Farm was built in the area near what is now Golborne Road. The farm got its name from a popular victory during the War of Jenkinsâ Ear, when Admiral Edward Vernon captured the Spanish-ruled town of Puerto Bello (now known as Portobelo in modern-day Panama).

Greenâs Lane became known as Porto Bello Lane; the title which it held by 1841.

The Portobello farming area covered the land which is now St. Charles Hospital. The farm itself was sold to an order of nuns after the railways came in 1864. They built St Josephâs Convent for the Dominican Order or the Black Friars as they were known in England.