Putney Bridge is a bridge crossing of the River Thames in west London, linking Putney on the south side with Fulham to the north. 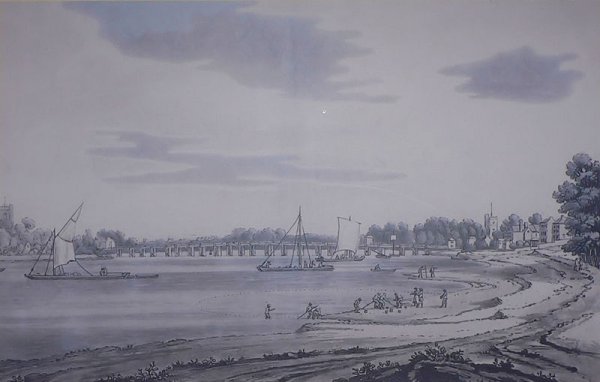 Putney Bridge, 1793, by J. Farington. This view shows a squared-rigged ’West Country’ barge, fishermen netting for salmon and erosion of the riverbank.
Credit: J. Farington
Construction of a bridge was first sanctioned by an Act of Parliament in 1726. Built by local master carpenter Thomas Phillips to a design by architect Sir Jacob Acworth, the first bridge was opened in November 1729, to become the only bridge between London Bridge and Kingston Bridge at the time. A toll bridge, it featured tollbooths at either end of the timber-built structure.

In October 1795, Mary Wollstonecraft allegedly planned to commit suicide by jumping from the bridge because she returned from a trip to Sweden to discover that her lover was involved with an actress from London.

In 1845, the bridge was specified as the starting point of a changed course for the annual Oxford - Cambridge University Boat Race.

The bridge was badly damaged by the collision of a river barge in 1870.

Although part of the bridge was subsequently replaced, soon the entire bridge would be demolished and in 1886 it was replaced by the stone bridge that stands today.

The current bridge was designed by civil engineer Sir Joseph Bazalgette as a five-span structure, built of stone and Cornish granite. (Joseph Bazalgette also designed London's sewerage system, and the Putney Bridge forms part of this system.) It was constructed by John Waddell of Edinburgh, whose tender of Â£240,433 was accepted on 15 April 1882. It is 210 metres long and 13 metres wide, and was opened by the Prince (later King Edward VII) and Princess of Wales on 29 May 1886.

The stone marking the downstream end of the Championship Course still used by the Boat Race, Wingfield Sculls and several major head races is now just upstream of the current bridge, but the bridge is still often incorrectly said to be the start of the Boat Race course.

Putney Bridge is the only bridge in Britain to have a church at both ends: St. Mary's Church, Putney is located on the south bank and All Saints Church, Fulham on the north bank. 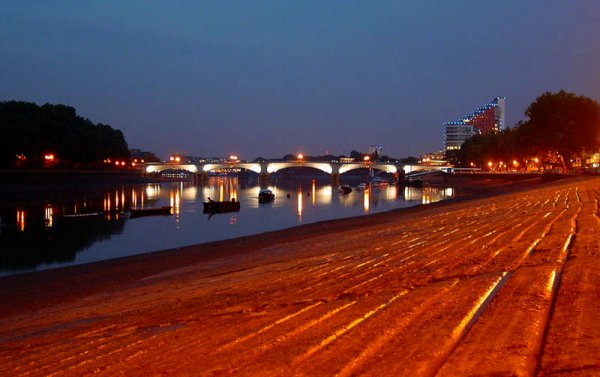 Putney is a district in the London Borough of Wandsworth, situated 5 miles south-west of Charing Cross.

Putney was an ancient parish in the Brixton hundred of the county of Surrey.

For centuries, Putney was a place where Londoners came for leisure, to enjoy the open spaces and clean air. Londoners came to Putney to play games. According to John Locke, who writes, in 1679: "The sports of England for a curious stranger to see are horse-racing, hawking, hunting, and bowling; at Putney he may see several persons of quality bowling two or three times a week."

One regular visitor was Queen Elizabeth I who frequently visited Putney from 1579â1603, often visiting Mr John Lacy. She was said to "honour Lacy with her company more frequently than any of her subjects", often staying for two to three days.

Putney ferry was mentioned in the household accounts of Edward I (1272â1307): Robert the Ferryman of Putney and other sailors received 3/6d for carrying a great part of the royal family across the Thames and also for taking the king and his family to Westminster.

The first permanent bridge between Fulham and Putney was completed in 1729, and was the second bridge to be built across the Thames in London (after London Bridge).
The bridge was a wooden structure and lasted for 150 years, when in 1886 it was replaced by the stone bridge that stands today.