Blackfriars Bridge railway station was a railway station on the London, Chatham and Dover Railway (LC&DR). It was constructed in 1864 and, for six months, was the northern terminus for a line from Herne Hill via Loughborough Junction. It was part of a scheme by the company to extend into the City of London. It ceased to be the terminus when the line was extended across the River Thames to Ludgate Hill where a temporary station in New Bridge Street was opened on 21 December 1864. 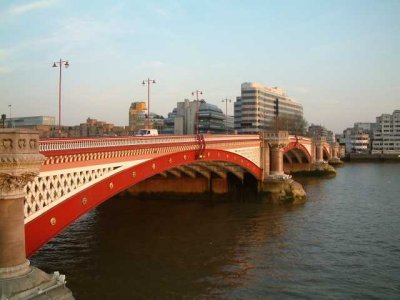 In 1885 with the opening of St Pauls station (later renamed Blackfriars) it was no longer deemed necessary for passenger requirements, and remained open solely as a goods station. It remained in this capacity into the 1960s until 1964, outlasting several other stations on the line such as Camberwell which was closed down in 1916.

Demolition of the station took place in August 1968. Today offices stand on the site of the goods yards, although a few remnants of the station still remain.

Southwark appears to recover only during the time of King Alfred and his successors. Sometime in and around 886 AD the Bridge was rebuilt and the City and Southwark restored. Southwark was called ’Suddringa Geworc’ which means the ’defensive works of the men of Surrey’. It was probably fortified to defend the bridge and hence the re-emerging City of London to the north. This defensive role is highlighted by the use of the Bridge as a defense against King Swein, his son King Cnut and in 1066, against King William the Conqueror. He failed to force the Bridge during the Norman conquest of England, but Southwark was devastated.

During the Middle Ages, Southwark remained outside of the control of the City and was a haven for criminals and free traders, who would sell goods and conduct trades outside the regulation of the City Livery Companies. An important market - later to become known as the Borough Market - was established there some time in the 13th century. The area was renowned for its inns, especially The Tabard, from which Chaucer’s pilgrims set off on their journey in The Canterbury Tales.

After many decades’ petitioning, in 1550, Southwark was incorporated into the City of London as ’The Ward of Bridge Without’. It became the entertainment district for London, and it was also the red-light area. In 1599, William Shakespeare’s Globe Theatre was built on the South Bank in Southwark, though it burned down in 1613. A modern replica, also called the Globe, has been built near the original site. Southwark was also a favorite area for entertainment like bull and bear-baiting. There was also a famous fair in Southwark which took place near the Church of St. George the Martyr. William Hogarth depicted this fair in his engraving of Southwark Fair (1733).

In 1861 the Great Fire of Southwark destroyed a large number of buildings between Tooley Street and the Thames, including those around Hays Wharf, where Hays Galleria was later built, and blocks to the west almost as far as St Olave’s Church.

The original plan for the Extension did not include a station between those at Waterloo and London Bridge; Southwark station was added after lobbying by the local council. Although it is close to Waterloo, not near the Bankside attractions it was intended to serve, and its only rail interchange is to London Waterloo East mainline station; the passenger usage matches those of other minor central stations. It does however get over double the traffic of nearby Borough station and around triple Lambeth North.