Wesr Hampstead overground station was known as West End Lane until its name was changed in 1975. 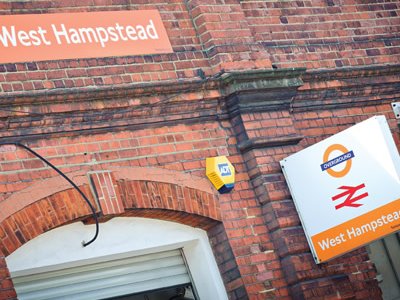 Following the privatisation of British Rail, the station was operated by the Silverlink train franchise from 1997 until 2007, when operations passed to Transport for London's London Overground system.

Anglia Railways used to run a regional rail service that called here, between Norwich and Basingstoke. This service known as London Crosslink, was discontinued in Autumn 2002 due to congestion on the North London Line and the financial return being less than that forecast.

The station received a major refurbishment towards the end of 2007, to coincide with the London Overground takeover. The ticket office has a new layout including automatic ticket gates and machines and the station is now staffed throughout traffic hours.

The arrangement of three separate stations (Thameslink, Overground and Jubilee Line) means that passengers wishing to change lines must walk along or cross West End Lane, a busy main road. A West Hampstead interchange proposal was put forward in 2004 by Chiltern Railways which would link the three West Hampstead stations with subterranean walkways. New platforms would be built for the Chiltern Main Line, and possibly also for the Metropolitan line, and the Thameslink and London Overground (formerly Silverlink) stations would be relocated on the east side of West End Lane. The redevelopment would involve demolishing existing buildings and the redevelopment of West End Lane as "a tree-lined boulevard".

The plans were put on hold in 2007 due to uncertainty over the North London Line rail franchise. This has now been shelved with Network Rail instead redeveloping the Thameslink station by installing a second footbridge with lift access leading to a new station building on Iverson Road.

In early 2008, the London Group of the Campaign for Better Transport published a plan for an off-road, mainly orbital North and West London Light railway, sharing the orbital Dudding Hill Line freight corridor, and taking over at least one of the two Midland Railway freight lines which run through the neighbouring West Hampstead Thameslink station.