One of the largest parks in the City of London, Postman's Park is a memorial to ordinary people who died saving the lives of others and might otherwise have been forgotten, 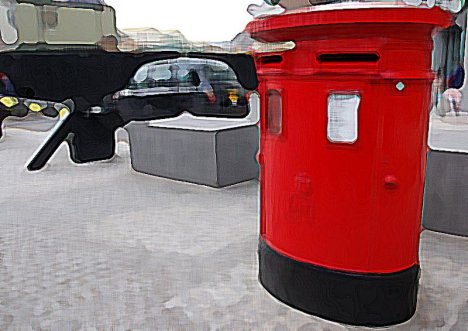 British post box in London, UK by Ralf Roletschek/Wikimedia Commons
The park's name reflects its popularity amongst workers from the nearby GPO's headquarters after it was opened in 1880. It is located on the site of the former St Botolph's Aldersgate church.

The severe lack of burial space in London meant that graves would be frequently reused in London's burial grounds, and the difficulty of digging without disturbing existing graves led to bodies often simply being stacked on top of each other to fit the available space and covered with a layer of earth. Differing numbers of parishioners in each parish led to burial grounds being used at different rates, and by the mid 19th century, the ground level of the St Botolph's Aldersgate churchyard was 6 feet above that of the Christ Church Greyfriars burial ground, and 4 feet above that of the St Leonard, Foster Lane burial ground.

Postman's Park, built on the site of these former burial grounds, is significantly elevated above the streets which surround it.

Painter and sculptor George Frederic Watts and his second wife Mary Fraser Tytler had long been advocates of the idea of art as a force for social change. Watts had painted a series of portraits of those figures he considered to be a positive social influence, the Hall of Fame, which was donated to the National Portrait Gallery.

Watts had long considered a national monument to the bravery of ordinary people and in 1900, the park became the location for Watts's Memorial to Heroic Self Sacrifice, a memorial in the form of a loggia and long wall housing ceramic memorial tablets. At the time of its opening, only four of the planned 120 memorial tablets were in place, with a further nine tablets added during Watts's lifetime. Following Watts's death in 1904, his wife Mary Watts took over the management of the project and oversaw the installation of a further 35 memorial tablets in the following four years, as well as a small monument to Watts. However, disillusioned with the new tile manufacturer and with her time and money increasingly occupied by the running of the Watts Gallery, Mary Watts lost interest in the project and only five further tablets were added during her lifetime.