The 'Vic' was the first building on the right when crossing the canal going north along Ladbroke Grove. 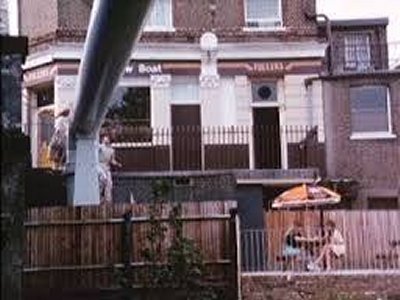 Its start date as a hostelry is unknown - the name (both "Victoria Arms" and "Queen Victoria") suggests that it was of 19th century origin though it is not marked as a pub on the 1900 map.

A very small establishment, it stood just next to a "dingy" staircase and alleyway which formed a short cut between Ladbroke Grove and what was Church Place - handy for the bus stop for the number 18 bus along the Harrow Road. Down the stairs were the toilets of the pub and a small beer garden.

Church Place is now called St John's Terrace and the right of way is still there.

In later years it became called "The Narrow Boat" and was a Fullers pub. It was a regular in the Good Beer Guide.

It fell into disrepair when the landlord, known as Wally, retired, then it fell down.

It closed around 1989 and has since been demolished.