West End Green is situated on a corner of West End Lane, formerly the location of West End Fair. 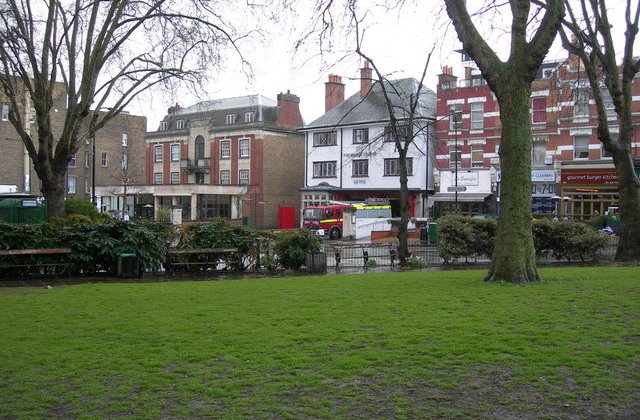 West End Green
The daily routine of life in the village of West End was disrupted every summer by hundreds of Londoners who came for the amusements on offer at West End Fair. This three-day event started in a small way with toy and gingerbread sellers, but it spread from the Green into fields nearby, attracting many professional showmen. In 1819 a riot occurred, when a mob of about 200 rampaged through the Fair, robbing and beating anyone they met. Ten people were brought to trial: three young men were hanged and the others were deported to Botany Bay. Little trouble was reported the following year but 1820 proved to be the last time the Fair was held.

When house building started to take up all the available land in the area, the area nearly lost its Green in 1875 when it was granted to John Culverhouse by the Lord of the Manor. Intending to sell the land for building, he had a hoarding set up around it but the local people pulled this down. The situation remained until 1882 when a Mr Fowle arranged to buy the land and set up a much stronger hoarding and began to strip the turf.

200 men tore down the hoarding and set it on fire.

Eight men were arrested but perhaps wisely found 'not guilty'. At the trial, evidence was given that the Green had been a recreation ground 'from time immemorial'."

The local Vestry (the equivalent of the Council), bought the land in 1885 and ten years later they also acquired Fortune Green as an open space, following more local protests when it too was threatened by developers.