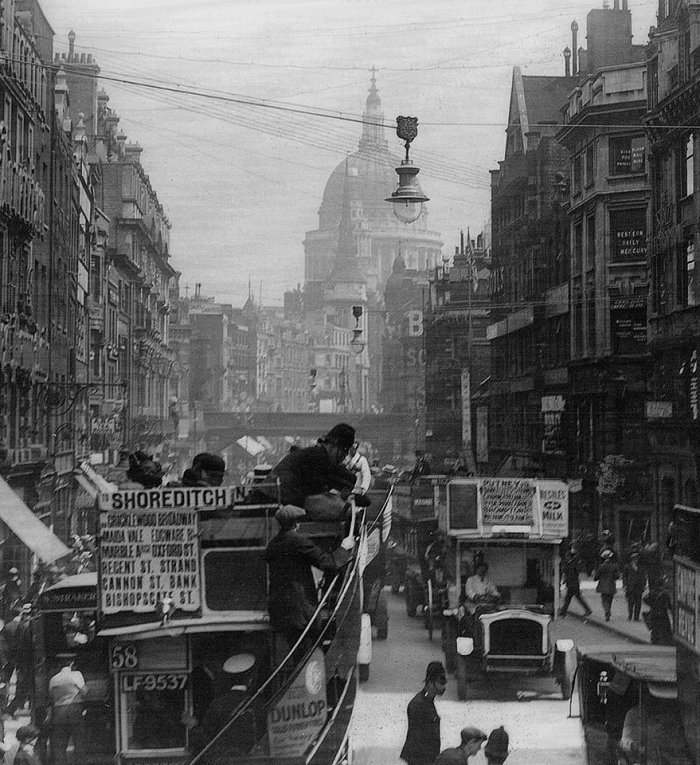 The railway bridge depicted lay beyond Ludgate Circus, and was part of the London, Chatham and Dover Railway which ran from Herne Hill south of the river to Farringdon.

This was expensive to build and the final section from Ludgate Hill to Farringdon, which included the bridge, was opened in January 1866. A short spur opened from just left of the bridge in 1874 and ran to Holborn Viaduct station. Even then the bridge was controversial and a petition of 1000 signatures was raised against it even before construction began.

There was a station just to the right of the bridge - Ludgate Hill station - and another to the left, just after the junction of the spur to Holborn Viaduct - Snow Hill - which was in a deep cutting as the line had to drop quite sharply to head under Smithfield market and then to Farringdon. In addition there was a goods yard to serve Smithfield and originally a connection allowing trains to travel eastwards on the Metropolitan to Liverpool St.

Snow Hill became Holborn Viaduct Low Level in 1912 and closed during WW1 - Ludgate Hill station closed in 1929. Freight traffic dropped off and in 1962 finished completely with the track removed in 1969 thus severing a cross-London link - all trains terminated at Holborn Viaduct which itself closed in 1990.

The original tunnels connecting to Farringdon remained, and in the late 1980s the value of a cross-London link was recognised.

With Holborn Viaduct station closed the bridge was removed and the line dropped below the surface - today City Thameslink station lies almost directly beneath where the bridge used to be.

Alas the police activity suggested in the foreground of the photograph remains unexplained.