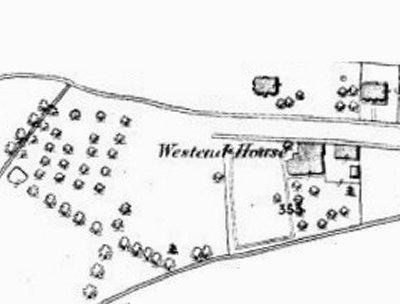 1870 map showing West End House
In 1655 William Hitchcock, merchant tailor, sold a new house, described in 1687 as a mansion house on the west side of West End Lane, to William Bennett, another London merchant. Bennett's house was probably also known as the "White House", which passed to Norwich Salisbury by 1692 and to Richard Limbrey in 1743.

To the north of it another house was held by three generations of Wachters, London merchants, possibly Jews, from 1649 to 1686.

The White House had by 1774 been replaced by West End House, which, as a result of the straightening of West End Lane, stood back from the road. The property, with other West End estates, passed in 1796 to Maria Beckford, whose family, which included William Beckford (1709-70), Lord Mayor of London, had occupied a house nearby since 1762 or earlier. The house was occupied by Miss Beckford from 1807 to 1810, by the marchioness of Headfort from 1815 to 1825, and by the Hon. Henry Frederick Compton Cavendish in 1842.

Another resident by 1800 was Germain Lavie, J.P., who was lessee of Lauriston Lodge and some 11 acres of the Gilberts estate, from 1806. The house, later occupied by Sir William Woods, Garter King-at-Arms, was of red brick with stained-glass windows and a fine entrance.

The transformation of West End came with the building of three railway lines south of the village, crossing West End Lane. Large sections of several estates were sold to the railway companies: in addition to the lines themselves, sidings, yards, and rubbish tips occupied much space and the remaining farm- and parkland was cut into segments, determining the subsequent street pattern.

The owner at that time, Reverend William Dunbar sold the estate to a speculator, Charles Bischoff, the owner in 1863 when the second railway line, the Midland, was proposed.

The Midland line, opened in 1868, passed along the northern boundary of West End House, which in 1857 became a girls' laundry training school and later accommodated railway workers before its demolition in the late 1890s.

Before 1873 Bischoff sold the estate to the British Land Company, which constructed Iverson Road, where four cottages were built in the West End portion in 1872, and developed the land to the west, in Kilburn, but most of the West End section was occupied by railway land.

The Midland Railway bought the eastern section of the estate and built coal offices in Iverson Road in 1890-1 and Heysham Terrace (nos. 202-20) on the site of West End House in 1897.