The entrance to the London and South Western Railway Depot at 186 Borough High Street in 1910. 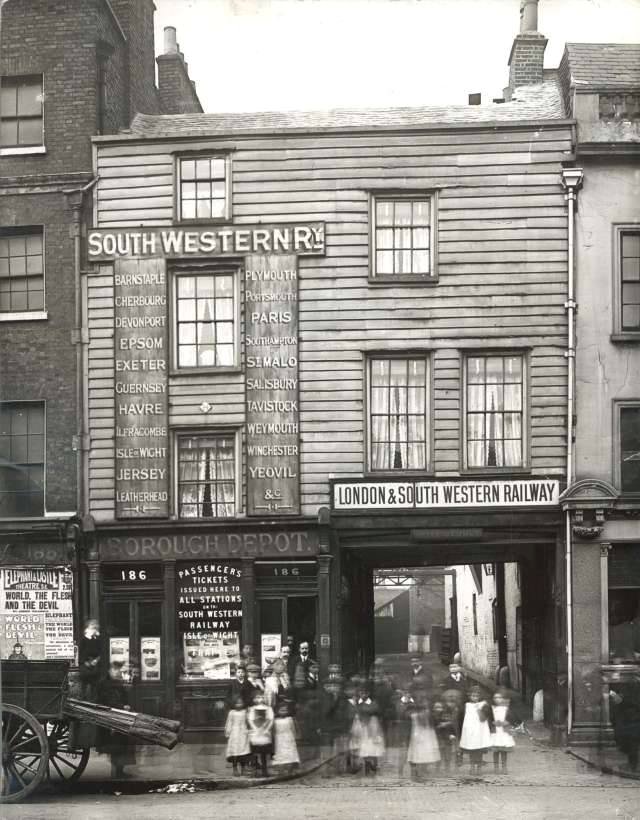 The entrance to the London and South Western Railway Depot at 186 Borough High Street in 1910.
Many old courtyards still existed on the South Bank until post-World War Two development swept them away.

Many were originally designed for horse traffic and housed stables within.

A modern office block called Brandon House in now on the site and marks where mansion called Suffolk Place, stood - demolished in 1557.

It is depicted by Anthony van den Wyngaerde's sixteenth century Panorama of London, which features Borough High Street prominently in the foreground of the picture.

After demolition the site of the mansion and the area to the west of Borough High Street here became notorious as the criminal enclave of The Mint.

The entrance to the London and South Western Railway Depot at 186 Borough High Street in 1910.
User unknown/public domain

Borough tube station is a London Underground station in the London Borough of Southwark. It is on the Northern Line, between Elephant and Castle and London Bridge stations.

The Borough (of Southwark) is an area of the London Borough of Southwark situated 1.5 miles east south-east of Charing Cross.

Much of the area around the Tate Modern gallery and the Globe Theatre is now referred to by the historic name of Bankside.

In common with much of the South Bank, The Borough has seen extensive regeneration in the last decade. Declining light industry and factories have given way to residential development, shops, restaurants, galleries and bars. The area is in easy walking distance of the City and the West End.

The Borough is generally an area of mixed development, with council estates, office developments, social housing and gated communities side by side with each other.

Borough station was opened on 18 December 1890 as part of the first deep-level tube railway, the City and South London Railway, and was rebuilt in the 1920s when the tunnels were enlarged.