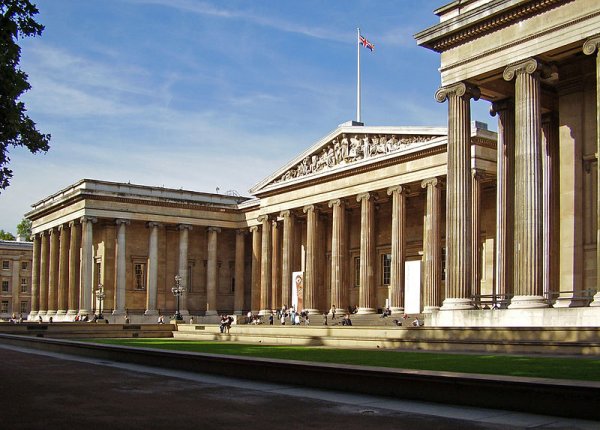 British Museum from the north east
Credit: Halicki
Its permanent collection, numbering some 8 million works, is among the largest and most comprehensive in existence and originates from all continents, illustrating and documenting the story of human culture from its beginnings to the present.

World-famous objects such as the Rosetta Stone, Parthenon sculptures, and Egyptian mummies are visited by up to 6 million visitors per year. In addition to the vast permanent collection, the museumâs special exhibitions, displays and events are all designed to advance understanding of the collection and cultures they represent.

The British Museum was established in 1753, largely based on the collections of the physician and scientist Sir Hans Sloane. The museum first opened to the public on 15 January 1759 in Montagu House in Bloomsbury, on the site of the current museum building. Its expansion over the following two and a half centuries was largely a result of an expanding British colonial footprint and has resulted in the creation of several branch institutions, the first being the British Museum (Natural History) in South Kensington in 1887.

As with all other national museums in the United Kingdom it charges no admission fee, except for loan exhibitions.

The earliest record of what would become Bloomsbury is the 1086 Domesday Book, which records that the area had vineyards and 'wood for 100 pigs'. But it is not until 1201 that the name Bloomsbury is first noted, when William de Blemond, a Norman landowner, acquired the land.

At the end of the 14th century Edward III acquired Blemond's manor, and passed it on to the Carthusian monks of the London Charterhouse, who kept the area mostly rural.

The publisher Faber & Faber used to be located in Queen Square, though at the time T. S. Eliot was editor the offices were in Tavistock Square. The Pre-Raphaelite Brotherhood was founded in John Millais's parents' house on Gower Street in 1848.

The Bloomsbury Festival was launched in 2006 when local resident Roma Backhouse was commissioned to mark the re-opening of the Brunswick Centre, a residential and shopping area. The free festival is a celebration of the local area, partnering with galleries, libraries and museums, and achieved charitable status at the end of 2012.