All Saints church was designed by the Victorian Gothic revival pioneer William White, who was also a mountaineer, Swedish gymnastics enthusiast and anti-shaving campaigner. 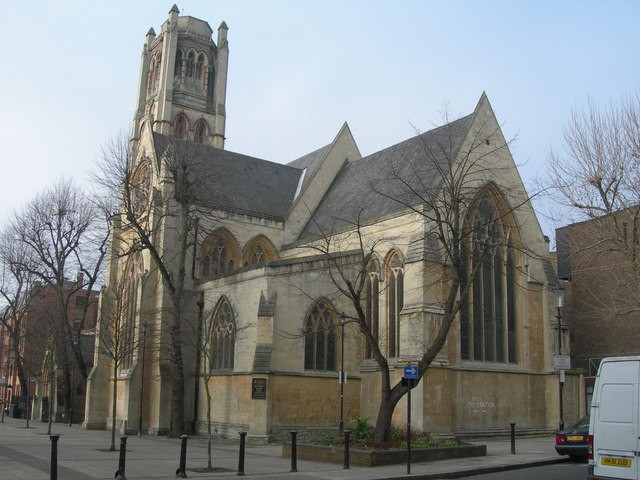 In 1852 the Reverend Walker bought 51 acres of Portobello farmland from Mary Anne and Georgina Charlotte Talbot. This covered the whole strip of North Kensington lying east of Portobello Lane, from Portobello farmhouse on the north to Lonsdale Road and Western Terrace on the south. On this land which joined the âLadbrooke estateâ, Walker commenced to build âa new townâ and erect an elaborate church to the memory of his parents.

The road on which the church was built was called St Columbâs Road, and the church was dedicated to St Ann, but the name of âAll Saintsâ was soon substituted.âThis âvery stately and abnormal stone church, built after the model of that at St Columbâs Major in Cornwall was structurally completed in 1855, but owing to pecuniary difficulties was left without glass or furniture till 1861.â Meanwhile it stood boarded up and weed-grown near a pond, the open ground behind being sometimes occupied by gypsies. A footpath which started beside the church, for some years after this date, led over fields all the way to Kensal Green. In 1861 Walker finished the church in a less costly mannerâ¦ But already it was known as Walkerâs Folly, and was sometimes irreverently called âAll Sinners in the Mudâ.â Florence Gladstone, âNotting Hill in Bygone Daysâ 1924.

During the Blitz, on the night of September 26 1940, bombs fell on All Saints church, All Saints Road and Powis Square.