The Adam and Eve Tearooms were a fashionable Georgian watering hole. 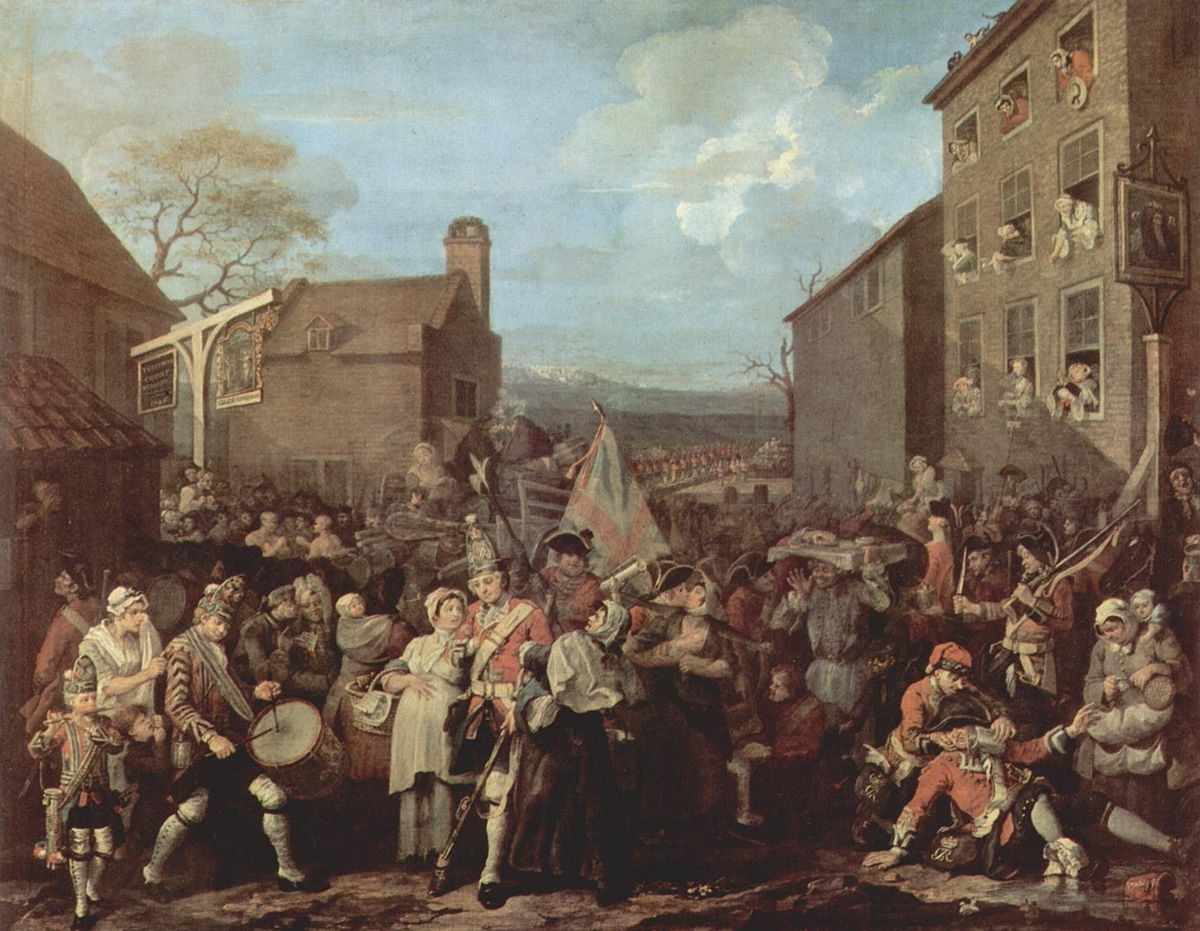 The March Of The Guards To Finchley - outside the Adam and Eve Tea Rooms.
Credit: William Hogarth
The Adam and Eve Tearooms existed at least as early as 1718 on the site of the manor house at the northern end of Tottenham Court Road. In the 18th century it had a long room with an organ, bowling alleys and extensive gardens with arbours for tea drinking. It was famous for its quiet orchards of wild fruit trees and its location beside the toll booth for the Hampstead Road turnpike going north helped trade no end.

William Hone, in his Yearbook (1832), remembered the Adam and Eve âwith spacious gardens at the side and in the rear, a fore-court with large timber trees, and tables and benches for out-door customers.â He speaks of the bowers and arbours for tea-drinking parties in the garden. The name of the inn goes back to 1718 and it is to be seen in Hogarthâs March of the Guards to Finchley in 1745 and it may be this inn to which George Wither, in Britainâs Remembrancer (1628), refers when he speaks of people resorting to Tottenham Court for cakes and cream.

On 13 May 1785 Vincenzo Lunardi, the balloonist, took off from the Honourable Artillery Company ground on his maiden flight and descended here within 20 minutes. âHe was immediately surrounded by great numbers of the populace and though he proposed reascending they were not to be dissuaded from bearing him in triumph on their shoulders.â

Towards the end of the 18th century the gardens became hemmed in with houses and were frequented by criminals and prostitutes. In the early 19th century they were shut by the magistrates. They were reopened as a tavern in 1813.

The following is taken from âThe History of the United Parishes of St Giles In The Fields by âRowland Dobieâ (1834):
These premises are at the corner of the Hampstead Road, and the New Road to Paddington, which is the site of the old manor house of Toten Hall. This was a lordship belonging to the deans of St. Paulâs Cathedral at the time of the Norman conquest. In 1560 it demised to the crown, and has always since been held on lease. In 1768 the manor vested in Lord Southampton, whose heirs pay an annuity, in lieu of a reserved rent, to the prebendary of Tottenham. Contiguous to the Adam and Eve, and near the reservoir of the New River Company, in the Hampstead road, there was lately standing an ancient house, called, in various old records, King Johnâs Palace. The Adam and Eve is now denominated a coffee-house, and that part which has been built of late years, and fronts the Paddington New road, with the sign board at the top corner, is used for tavern purposes, and connects with the older part of the building; the entrance to which is through the gateway with the lamp over it, in the Hampstead road. Within alone, with spacious gardens in the rear and at the sides, and a fore-court with large timber trees, and tables and benches for out-of-door customers. In the gardens were fruit-trees, and bowers, and arbours, for tea-drinking parties. In the rear there were not any houses; now there is a town.

At that time the âAdam and Eve Tea Gardensâ were resorted to by thousands, as the end of a short walk into the country; and the trees were allowed to grow and expand naturally, unrestricted by art or fashion, which then were unknown to many such places as this, and others in the vicinage of London. At that time, too, there was only one Paddington stage. It was driven by the proprietor, or, rather, tediously dragged, along the clayey road from Paddington to the city, in the morning, and performed its journey in about two hours and a-half. It returned to Paddington in the evening, within three hours from its leaving the city; this was deemed âfair time,â considering the necessity for precaution against accidents of ânight travelling!â

The Adam & Eve Tea Rooms would, on a modern map, be located at the north west corner of the junction of the Hampstead Road/Tottenham Court Road and the Euston Road. Later, Capital Radioâs Euston Tower was situated on the spot.

The March Of The Guards To Finchley - outside the Adam and Eve Tea Rooms.
William Hogarth 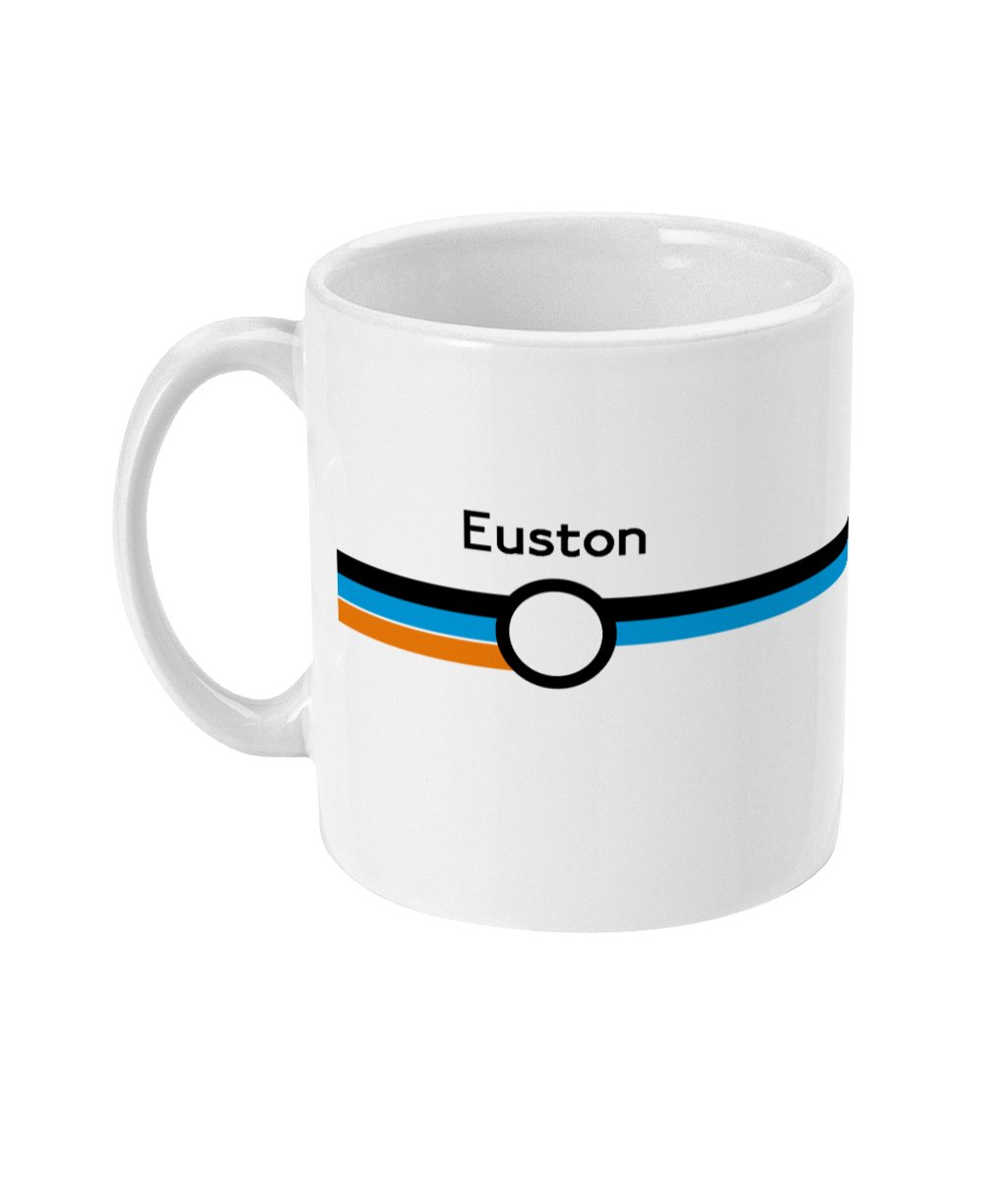