The Victoria Road stadium, under various sponsorship names, is the home ground of Dagenham & Redbridge F.C. 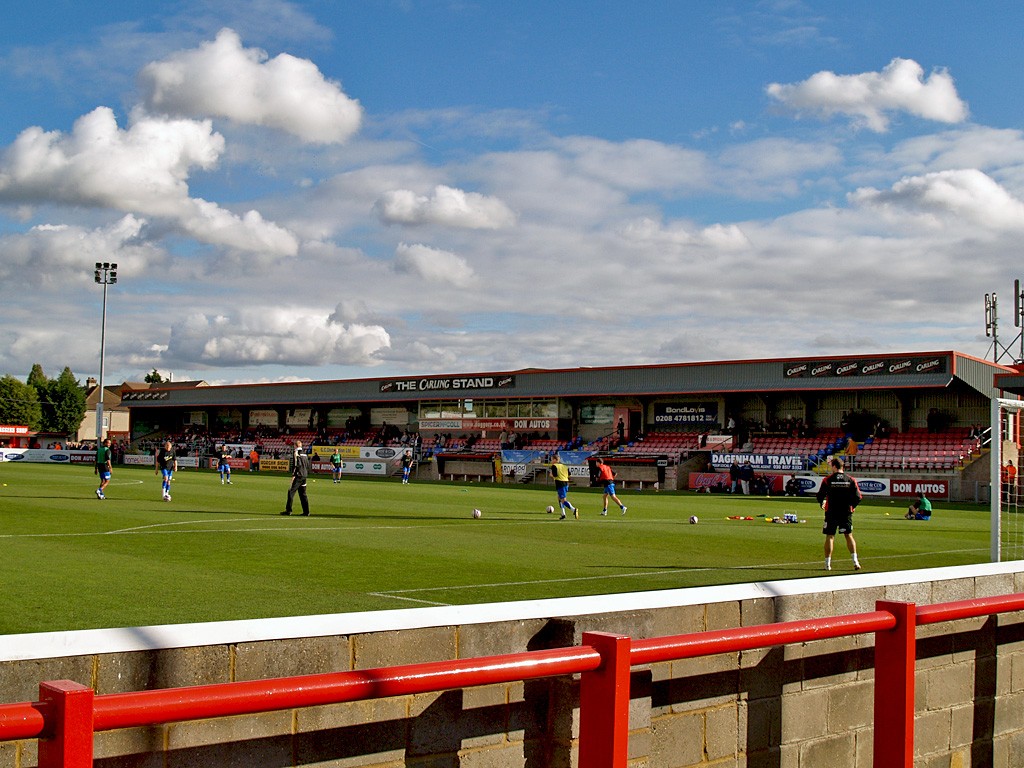 The Carling Stand on Saturday 18 October 2008.
Credit: David Ingham
The site on Victoria Road has been a football ground since 1917, when it was used by the Sterling Works side, whose factory was situated alongside it. It was not fully enclosed until the summer of 1955, when Briggs Sports moved out to Rush Green Road, and Dagenham F.C. moved from the Arena. During that summer they levelled and re-seeded the pitch, removed the stones from the playing surface and extended the banking and the terracing. The only cover was a tiny wooden stand, which was steep and narrow and had a few rows of seating on the far side of the ground. The main stand was built in the autumn of 1955 and was opened on 7 January 1956 by J.W. Bowers, chairman of the Essex County Football Association. During the summer of 1956 the turnstile block at the Victoria Road side of the ground and the men’s toilets situated at the Victoria Road were added. In the summer of 1958 the cover over the far side was erected at a cost of Â£1,400. The first floodlit match at Victoria Road was Dagenham v Woodford in the FA Youth Cup on 26 September 1957 and the first senior match was a friendly against Rainham Town F.C. on 19 March 1958. The attendance record was set in 1967 with the visit of Reading F.C. in the FA Cup when 7,200 crammed into the ground.

Although the ground was regularly maintained, it changed little until the arrival of Redbridge Forest in 1990 to ground share. They paid for a new stand to be erected in the corner of the ground to increase the seating capacity and replaced the grass banking with concrete terracing. These improvements brought the ground up to the standard required by the Football Conference. Redbridge Forest and Dagenham merged in July 1992 and the ground improvements have continued right up to the present day. In 1995 they replaced the crumbling pitch perimeter wall with a new brick-built one and two years later rebuilt the toilet block at the Victoria Road end of the ground. The club brought in Bill O’Neil from Atcost to design and build a new purpose-built stand. The new 800-seater, which brings the seating capacity to over a thousand, was used for the first time for the Essex Senior Cup final against Canvey Island on 4 August 2001, twelve weeks after the old stand was last used. During summer 2001 new turnstile blocks were constructed and the eight floodlights were replaced with four corner ones.

In October 2001, Bass brewers agreed a Â£150,000 sponsorship of the new stand, now named the Carling Stand. This provided the funds for the improvements to continue and a number of crush barriers were installed in 2002, which helped ease the flow of spectators around the ground along with a new walkway behind the covered terrace. Whilst the Dagenham & Redbridge record attendance is 5,949, set against Ipswich Town in January 2002, these improvements have enabled the ground to meet Football League status and the capacity is now 6,078. In July 2007 a new sponsorship deal was set up with the Barking and Dagenham London Borough Council with the stadium renamed the London Borough of Barking & Dagenham Stadium.

The Traditional Builders & Contractors Ltd Stand at the west end of the ground (Pondfield Road end) was built during the close season of 2009; it has a capacity of 1,240 and is all seated. Access to the away stand is via gates at the far end of the ground from the entrance via Victoria Road. The stand has disabled facilities, and also incorporates a bar, snack bar, and new club office and changing facilities. The players now emerge onto the pitch from a tunnel in the stand (left) rather than the old tunnel in the middle of the Carling Stand.

The floodlights were replaced in the summer of 2012 bringing the, now renamed, Chigwell Construction Stadium fully up to the new Football League regulations with regards to floodlighting. 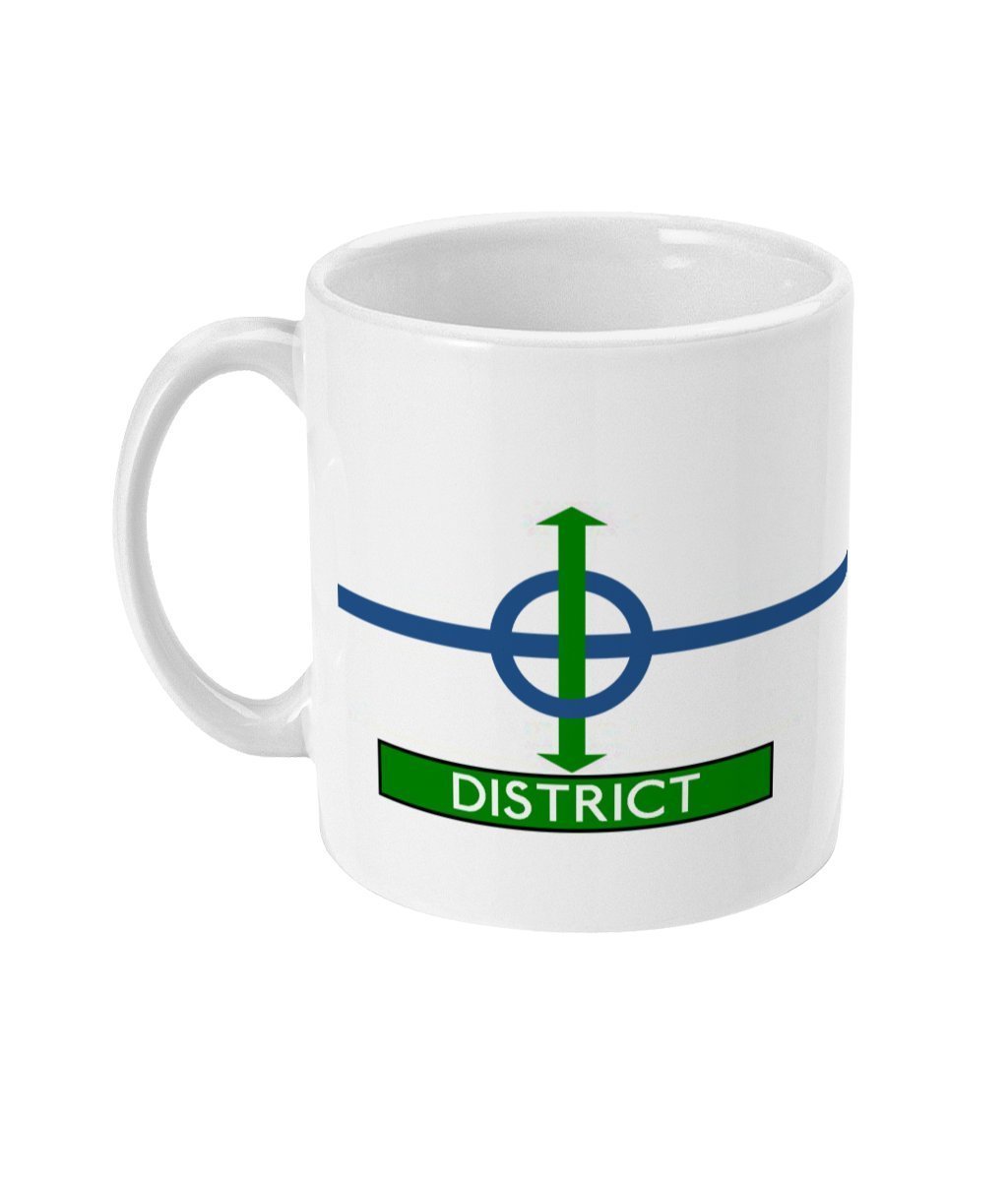 Dagenham East opened as a main line station in 1885 and was called Dagenham. The current station buildings date from the introduction of electric services in 1932 and of typical railway architectural style for the period, with little trace remaining of the station's Victorian origins. In 2006 the station was extensively refurbished by Metronet.

The station was the location of a post-war rail crash. The accident took place at around 7.30pm on 30 January 1958 and was a rear-end collision of two late-running trains. Conditions at Dagenham East station were foggy at the time. The accident occurred after one train had passed a signal indicating danger due to a driver error. Ten passengers were killed in the accident and 89 injured. An 18:35 train ploughed into the back of an 18:20 departure which demolished three carriages and derailed several others. The locomotive of the 18:35 train and leading carriage were derailed.