The Adelphi is a small district surrounding the streets of Adelphi Terrace, Robert Street and John Adam Street.

The district is named after the Adelphi Buildings, a block of 24 unified neoclassical terrace houses occupying the land between The Strand and the River Thames in the parish of St Martin in the Fields, which also included a headquarters building for the "Society for the encouragement of Arts, Manufactures and Commerce" (now generally known as the Royal Society of Arts). They were built between 1768-72, by the Adam brothers (John, Robert, James and William Adam), to whom the buildings’ Greek-derived name refers. The ruins of Durham House on the site were demolished for their construction. The nearby Adelphi Theatre is named after the Adelphi Buildings. Robert Adam was influenced by his extensive visit to Diocletian’s Palace in Dalmatia, and applied some of this influence to the design of the neoclassical Adelphi Buildings.

Adelphi has no formally defined boundaries, though they are generally agreed to be: Strand to the north, Lancaster Place to the east, Victoria Embankment to the south and Charing Cross station to the west.

Many of the Adelphi Buildings were demolished in the early 1930s and replaced with the New Adelphi, a monumental Art Deco building designed by the firm of Collcutt & Hamp; buildings remaining from the old Adelphi include 11 Adelphi Terrace (formerly occupied by numismatic specialists A.H. Baldwin & Sons Ltd) and the Royal Society of Arts (which has expanded to incorporate two of the former houses). Benjamin Pollock’s Toy Shop was located here in the 1940s. 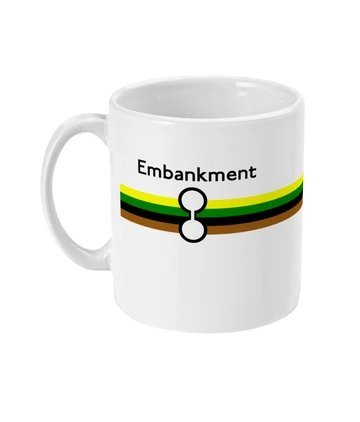 Embankment underground station has been known by various names during its long history - including "Embankment".

The station is in two parts: sub-surface platforms opened in 1870 by the Metropolitan District Railway (MDR) as part of the company's extension of the Inner Circle eastwards from Westminster to Blackfriars and deep-level platforms opened in 1906 by the Baker Street and Waterloo Railway (BS&WR) and 1914 by the Charing Cross, Euston and Hampstead Railway (CCE&HR). A variety of underground and mainline services have operated over the sub-surface tracks and the CCE&HR part of the station was reconstructed in the 1920s.

Contrary to popular belief, the shortest walking distance between two stations is not the 250 metres between Leicester Square and Covent but between Charing Cross and Embankment, a distance of 100 metres.