Deptford Ferry Road ran down to the Thames from West Ferry Road. 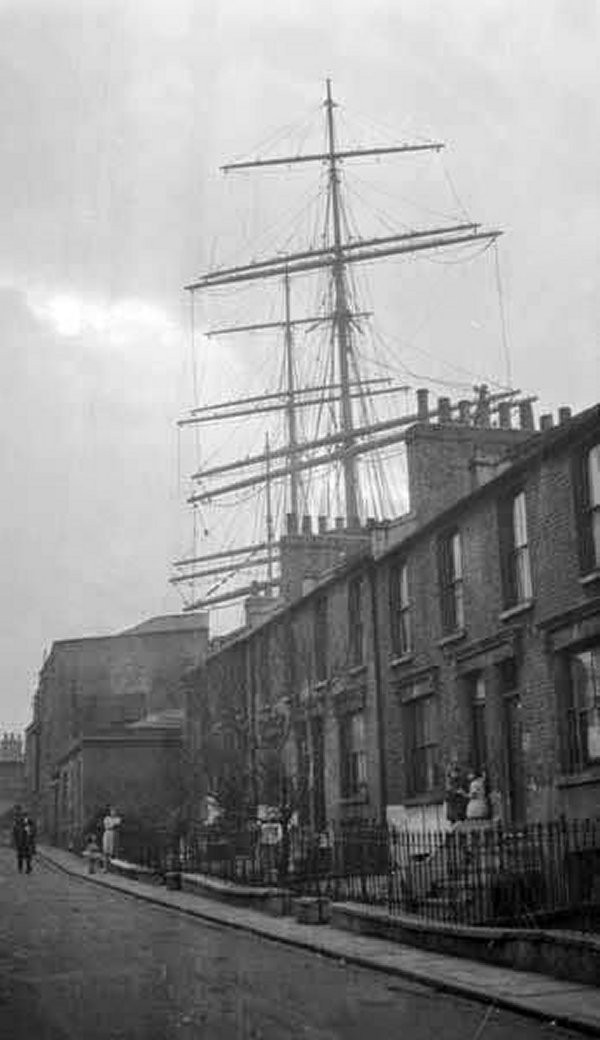 Deptford Ferry Road - view of Britannia Dock. Above the terraced houses the masts and yards of the barque Killoran can be seen under repair in Britannia Dry Dock in 1928.
Credit: Museum of London
By the 1500s, there was a ferry running from the Isle of Dogs to Deptford, with a road running down to it.

Deptford Ferry Road was squeezed between the Canadian Cooperage and the Britannia Dock - the latter was extensive used for maintenance and repairs of shipping.

After having been sawmills and a joinersâ shop, the Canadian Cooperage was the name for the works of the Guelph Patent Cask Company Ltd, comprising of a range of one- and two-storey buildings. They burned down in 1900 and were replaced by a cask store, warehouse and mill, made of corrugated-iron.

The few houses in the street were squeezed between industrial sites and had become slums by 1899.

Although plans for redevelopment drawn up in 1916 by Ironmongersâ surveyor George Hubbard, the First World War saw these put on hold.

Behind the houses, Totnes Cottages were demolished in 1936. Totnes Terrace (renamed Mast House Terrace) was destroyed by bombing in the Second World War.

21st century redevelopment has left only a stump of a street remaining.

Deptford Ferry Road - view of Britannia Dock. Above the terraced houses the masts and yards of the barque Killoran can be seen under repair in Britannia Dry Dock in 1928.
Museum of London

Cubitt Town lies on the eastern side of the Isle of Dogs. William Cubitt was responsible for the early housing which accommodated the growing population of dockworkers and shipbuilders.

Along with the housing, Cubitt also created many local businesses.

During the 1960s and 1970s, high-rise estates began to be built and during the 1990s and afterwards, the Canary Wharf complex attracted a different mix of people.