The Fascination of Chelsea was a book published in 1902. 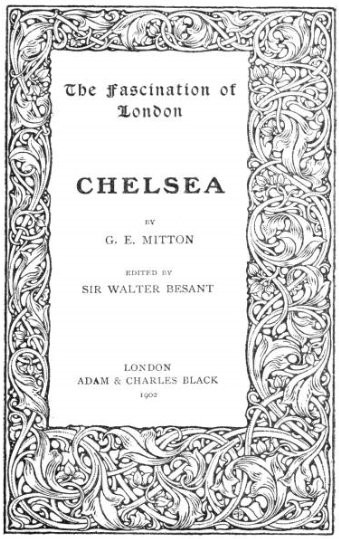 It was written by Geraldine E. Mitton. It was part of the "Fascination of London" series edited by Walter Besant and published posthumously in 1902 following his death the previous year.

The Spectator published the following contemporary review: "The Fascination of London : Chelsea. By G. E. Mitten. Edited by Sir W. Besant. (A. and C. Black. ls. 6d. net.)âThis volitme, one of four on the same scale and with substantially the same author; ship, Mr. Mitten collaborating with Sir W. Besant, or having his work supervised by him, is an earnest of the great work on the Metropolis which Sir W. Besant contemplated. Each parish was to be perambulated and made the subject of a small book, Chelsea being chosen as a specimen, with . Hampstead, Westminster, and the Strand district. This is a very pleasant little book, the work of.a competent observer, who knows what to look for and how to deal with what be finds. Of course there are omissions. Perhaps one might say that the Chelsea of this little book is too exclusively genteel. There is a riverside population of whom much that is curious might be told. Possibly we are to have a special volume dealing with the Thames. There is a useful map."

The name Chelsea, according to Faulkner and Lysons, only began to be used in the early part of the eighteenth century. During the sixteenth and seventeenth centuries the place was known as Chelsey, and before that time as Chelceth or Chelchith. The very earliest record is in a charter of King Edward the Confessor, where it is spelt Cealchyth. In Doomsday Book it is noted as Cercehede and Chelched. The word is derived variously. Newcourt ascribes it to the Saxon word ceald, or cele, signifying cold, combined with the Saxon hyth, or hyd, a port or haven. Norden believes it to be due to the word "chesel" (ceosol, or cesol), a bank "which the sea casteth up of sand or pebble-stones, thereof called Cheselsey, briefly Chelsey, as is Chelsey (Winchelsea?) in Sussex." Skinner agrees with him substantially, deriving the principal part of the word from banks of sand, and the ea or ey from land situated near the water; yet he admits it is written in ancient records Cealchythâ"chalky haven." Lysons asserts that if local circumstances allowed it he would have derived it from "hills of chalk." Yet, as there is neither hill nor chalk in the parish, this derivation cannot be regarded as satisfactory. The difficulty of the more generally received interpretationâviz., shelves of gravel near the waterâis that the ancient spelling of the name did undoubtedly end in hith or heth, and not in ea or ey.

The dividing line which separated the old parish of Chelsea from the City of Westminster was determined by a brook called the Westbourne, which took its rise near West End in Hampstead. It flowed through Bayswater and into Hyde Park. It supplied the water of the Serpentine, which we owe to the fondness of Queen Caroline for landscape gardening. This well-known piece of water was afterwards supplied from the Chelsea waterworks. The Westbourne stream then crossed Knightsbridge, and from this point formed the eastern boundary of St. Luke’s parish, Chelsea. The only vestige of the rivulet now remaining is to be seen at its southern extremity, where, having become a mere sewer, it empties itself into the Thames about 300 yards above the bridge. The name survives in Westbourne Park and Westbourne Street. The boundary line of the present borough of Chelsea is slightly different; it follows the eastern side of Lowndes Square, and thence goes down Lowndes Street, Chesham Street, and zigzags through Eaton Place and Terrace, Cliveden Place, and Westbourne Street, breaking off from the last-named at Whitaker Street, thence down Holbein Place, a bit of Pimlico, and Bridge Road to the river.

In a map of Chelsea made in 1664 by James Hamilton, the course of the original rivulet is clearly shown. The northern boundary of Chelsea begins at Knightsbridge. The north-western, that between Chelsea and Kensington, runs down Basil and Walton Streets, and turns into the Fulham Road at its junction with the Marlborough Road. It follows the course of the Fulham Road to Stamford Bridge, near Chelsea Station. The western boundary, as well as the eastern, had its origin in a stream which rose to the north-west of Notting Hill. Its site is now occupied by the railway-line (West London extension); the boundary runs on the western side of this until it joins an arm of Chelsea Creek, from which point the Creek forms the dividing line to the river.

The parish of Chelsea, thus defined, is roughly triangular in shape, and is divided by the King’s Road into two nearly equal triangles.

An outlying piece of land at Kensal Town belonged to Chelsea parish, but is not included in the borough.

The first recorded instance of the mention of Chelsea is about 785, when Pope Adrian sent legates to England for the purpose of reforming the religion, and they held a synod at Cealchythe.

In the reign of Edward the Confessor Thurstan gave Chilchelle or Chilcheya, which he held of the King, to Westminster Abbey. This gift was confirmed by a charter which is in the Saxon language, and is still preserved in the British Museum. Gervace, Abbot of Westminster, natural son of King Stephen, aliened the Manor of Chelchithe; he bestowed it upon his mother, Dameta, to be held by her in fee, paying annually to the church at Westminster the sum of L4. In Edward III.’s reign one Robert de Heyle leased the Manor of Chelsith to the Abbot and Convent of Westminster during his own lifetime, for which they were to make certain payments: "L20 per annum, to provide him daily with two white loaves, two flagons of convent ale, and once a year a robe of Esquier’s silk." The manor at that time was valued at L25 16s. 6d. The Dean and Chapter of Westminster hold among their records several court rolls of the Manor of Chelsea during the reigns of Edward III. and Richard II. With the exception that one Simon Bayle seems to have been lessee of the Manor House in 1455, we know nothing definite of it until the reign of Henry VII., after which the records are tolerably clear. It was then held by Sir Reginald Bray, and from him it descended to his niece Margaret, who married Lord Sandys. Lord Sandys gave or sold it to Henry VIII., and it formed part of the jointure of Queen Catherine Parr, who resided there for some time with her fourth husband, Lord Seymour.

Afterwards it appears to have been granted to the Duke of Northumberland, who was beheaded in 1553 for his attempt to place Lady Jane Grey on the throne. The Duchess of Northumberland held it for her life, and at her death it was granted to John Caryl, who only held it for a few months before parting with it to John Bassett, "notwithstanding which," says Lysons, "Lady Anne of Cleves, in the account of her funeral, is said to have died at the King and Quene’s majestys’ Place of Chelsey beside London in the same year."

Queen Elizabeth gave it to the Earl of Somerset’s widow for life, and at her death it was granted to John Stanhope, afterwards first Lord Stanhope, subject to a yearly rent-charge. It is probable that he soon surrendered it, for we find it shortly after granted by Queen Elizabeth to Katherine, Lady Howard, wife of the Lord Admiral. Then it was held by the Howards for several generations, confirmed by successive grants, firstly to Margaret, Countess of Nottingham, and then to James Howard, son of the Earl of Nottingham, who had the right to hold it for forty years after the decease of his mother. She, however, survived him, and in 1639 James, Duke of Hamilton, purchased her interest in it, and entered into possession. He only held it until the time of the Commonwealth, when it was seized and sold; but it seems that the purchasers, Thomas Smithby and Robert Austin, only bought it to hold in trust for the heirs of Hamilton, for in 1657 Anne, daughter and coheiress of the Duke of Hamilton, and her husband, Lord Douglas, sold it to Charles Cheyne. He bought it with part of the large dower brought him by his wife, Lady Jane Cheyne, as is recorded on her tombstone in Chelsea Church. Sir Hans Sloane in 1712 purchased it from the then Lord Cheyne. He left two daughters, who married respectively Lord Cadogan and George Stanley. As the Stanleys died out in the second generation, their share reverted by will to the Cadogans, in whom it is still vested. 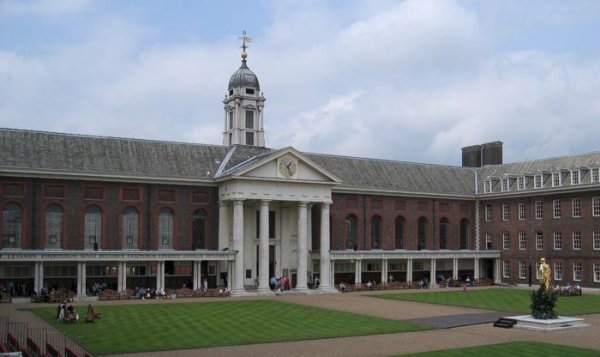