Drayton Park was originally called Highbury Hill Park, amidst a confusion of nearby roads with the word ’Highbury’ in them.

The reason for the ’Drayton’ in the new name for the road is unknown.

The Great Northern Railwayâs Canonbury spur opened in 1874 and development then began apace. The area became quite industrial as a railway depot took centre stage. Subsequently a gasworks and paper factory arrived.

The 2006 Emirates now domiates the area. The stadium project was the largest recent development in Islington and has regenerated its surroundings. 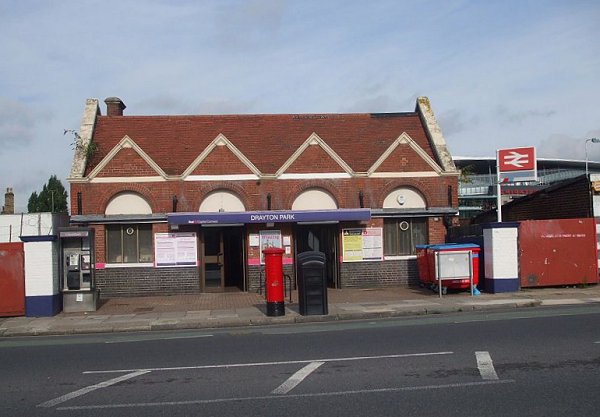 Drayton Park railway station is in Islington, just off the Holloway Road near its southern end, close to the Liverpool Road junction. It stands in the shadow of Arsenal football clubâs Emirates Stadium.

Drayton Park was opened by the Great Northern & City Railway (GN&CR) on 14 February 1904. The GN&CR was constructed to provide a route for Great Northern Railway (GNR) trains between the GNR station at Finsbury Park and the Metropolitan Railway (MR) and City & South London Railway station at Moorgate. With the exception of Drayton Park station and the former depot which are in a deep cutting, the railway was constructed in tube tunnel. The tunnels were constructed with a larger diameter than the other deep-tube railways to accommodate GNR main-line trains but a dispute between the two companies prevented the GN&CR connecting its tunnels to the GNR platforms at Finsbury Park. The GN&CR tunnels instead terminated beneath the main-line station without a running connection to the surface, rolling stock accessing the line via a yard connection at Finsbury Park.

In 1913 the GN&CR was taken over by the MR. The MR ran the line under its own name until it became part of the London Passenger Transport Board (LPTB) in 1933. In preparation for the LPTBâs Northern Heights plan the line was transferred to the control of the Morden-Edgware Line (now the Northern Line).

The Northern Heights plan involved the construction of the GN&CRâs unbuilt connection from Drayton Park to the surface platforms at Finsbury Park and the transfer of the London and North Eastern Railway (LNER) branches from there to Edgware, High Barnet and Alexandra Palace. By 1939 much of the work for the connection of the lines had been done including the ramps needed to take the tracks from Drayton Park up to Finsbury Park and the opening of the connection was scheduled for autumn 1940, but the start of World War II put a halt to further construction.

After the war the plan to incorporate the Alexandra Palace branch into the Underground was cancelled and it closed to passengers in the 1950s. No further effort was made to connect the City Line to the main-line platforms (owned after the 1948 nationalisation by British Railways) and Northern Line tube trains continued to run in tunnel to Finsbury Park.

Although the Victoria Line does not serve Drayton Park its construction during the 1960s did have a significant impact on the station. The City Line tunnels north of Drayton Park were closed on 3 October 1964 and were reused by the Victoria Line, which was connected to them south of Finsbury Park. Drayton Park became the northern terminus of the City line, which later became known as the Northern Line Highbury Branch.

On 4 October 1975 the line was closed and ceased to be part of the London Underground. The line was transferred to British Rail (BR) and the unused ramps from the cancelled Northern Heights plan finally received the tracks to connect the line to the surface platforms at Finsbury Park. On 8 August 1976 Drayton Park reopened as part of the BR network with main-line-sized trains running to Old Street. On 8 November 1976, 72 years after the GN&CR opened, the line was opened for main-line trains from Moorgate to Finsbury Park and beyond as had been originally intended.

Following the transfer of the line from London Transport to British Rail, the tube train car sheds at Drayton Park became redundant. The track in the sheds and outside in the yard had only been used by slow-moving empty tube trains, so was in very good condition. It was purchased by the Ffestiniog Railway in North Wales and the job of lifting and loading it onto a bogie flat wagon fell to volunteers of the London Area Group of the Ffestiniog Railway Society. This was accomplished over about three weekends in June 1977.

Trains on the line have dual power pick-up equipment. In the tunnel section trains use a third rail, and above ground they use overhead line equipment via pantographs. Trains change between the two methods at Drayton Park and the transition may be noticeable as sparks or momentary power blackouts.