Blenheim Crescent one of the major thoroughfares in Notting Hill - indeed it features in the eponymous film. 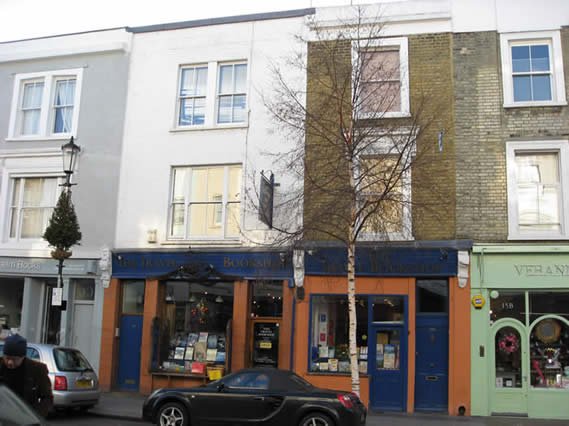 The Travel Bookshop which inspired the movie.
Blenheim Crescent runs from Portobello Road west across Ladbroke Grove and then curls round to the south to join Clarendon Road. The section between Portobello Road and Kensington Park Road consists of shops and cafÃ©s, including at one time the Travel Bookshop that inspired the 1999 film Notting Hill; the rest of the street is residential. The odd numbers are on the south side and the evens on the north. From Ladbroke Grove west, the whole crescent is now lined with magnificent mature cherry trees.

Until the middle of the 19th century, what is now Blenheim Crescent was open country. Plans began to be developed for creating a road in the 1840s. In preparation sewers were laid at any rate at the Clarendon Road end in about 1850, and some building leases were let. But the demand for housing had collapsed and the lessees probably failed to raise the necessary finance. Nothing much further happened until the 1860s, when the last great wave of development on the Ladbroke Estate began.

By 1860, the Ladbroke family had sold the land on which Blenheim Crescent now stands. Most of it had passed into the ownership of Charles Henry Blake, a retired Calcutta merchant who had turned to property speculation. In partnership with Charles Chambers, variously described as a timber merchant or an engineer, he was mainly responsible for developing the road. It was a propitious moment. There had been a revival in the demand for houses and the area was made a lot more desirable by the opening in 1864 of an extension to the City and Hammersmith Railway with a station in Ladbroke Grove (then called Notting Hill Station).

An Ordnance survey map dating from 1863 indicates that the street had been fully laid out by then and that a cluster of houses had gone up at the Clarendon Road end. In particular, a terrace of 27 houses had been erected at the end of the south side. This row of houses (now Nos. 83-135) was baptised âBlenheim Crescentâ, and subsequently gave its name to the whole street (the street was originally called Sussex Road west of Ladbroke Grove and St Columb Road east of Ladbroke Grove). The only structures in the rest of the street were the present No. 51 near the south-east corner with Ladbroke Grove; the high back garden wall of a convent on the north-east corner with Ladbroke Grove; and a lone public house, the Arundel Arms, on the corner of Kensington Park Road at what is now No. 14 Blenheim Crescent (this pub was subsequently renamed the Blenheim Arms and went out of business only in the early 2000s).

Construction obviously proceeded apace, as by the time of the 1871 census, almost all the present houses had been completed and the street had acquired its present name. 14 houses were still empty, but the vast majority had found tenants. It seems likely, therefore, that Blake did well out of Blenheim Crescent (he was one of the few developers of the Ladbroke estate not to come to financial grief).

Unlike some streets on the Ladbroke estate, where whole streets or sides of streets were constructed by the same person, Blenheim Crescent is a patchwork of different styles. The building plots were let on 99-year leases to different builders, often in quite small packages, and each did his own thing. Once the houses had been constructed, the builders would let them and cover their investment from the rental income; a (usually rising) ground rent remained payable to the landowner.

The whole of the Ladbroke estate was very much a middle class area in the 19th century, but the inhabitants of Blenheim Crescent were from the beginning quite a lot less grand than those in the southern part of the estate. The Portobello end seems always to have been occupied by tradesmen. Further up the street, the occupants in 1871 were chiefly professionals, although at the lower end of the scale compared to the occupants of the grander houses to the south. They included accountants, clerks, civil servants and merchants. Many of the houses were occupied by widows living on a (probably small) income from dividends or annuities, usually with a couple of children or other relatives living with them. Almost all the households included one or two servants. Several of the houses were lodging houses.

Blenheim Crescent seems to have gently declined over the first half of the 20th century, more and more of the houses going into multi-occupation. The history of No. 38 is fairly typical. Its first occupant in 1868 was Charles Barber, late of H.M. Indian Civil Service. The next occupant was a member of the prosperous merchant classes, a 31-year-old tea broker named Thomas White. He was the senior partner in the firm of George White and Co. In 1871 he had living with him his wife, four young children, a cook-domestic and two nursemaids, and he travelled to work every day by private carriage to Eastcheap. By 1881, the house was in the possession of a widow living on income from house property, a traditional and respectable source of revenue for middle-class folk. By 1891, the widow had died and the house had passed to her brother, also a man of independent means. The house then changed ownership a couple of times before becoming the residence of the local doctor in the early 1900s. By 1924, however, the house had been divided between two families, and by 1936 there seem to have been` three families living there. It was not until 1991, when the house was in a very dilapidated state, that it was purchased by a family who did it up and converted it back into a single family residence.

With the 1960s, a slow ascent to prosperity began, with families increasingly taking over the multi-occupied rented accommodation characteristic of the Rachman era. One of the first of the new wave of residents was the fashion designer Ossie Clark, who moved into a flat at No. 51a in 1966. Now the street is more desirable than probably any time in its history. Ironically (and despite a few acts of vandalism like that by the Kensington Housing Trust described above), the Notting Hill Housing Trust, by buying up then despised and crumbling Victorian houses in the streets of North Kensington, may have been responsible for saving some of the houses which are now so valued.