Talbot Yard used to host one of the most famous inns in English literature. 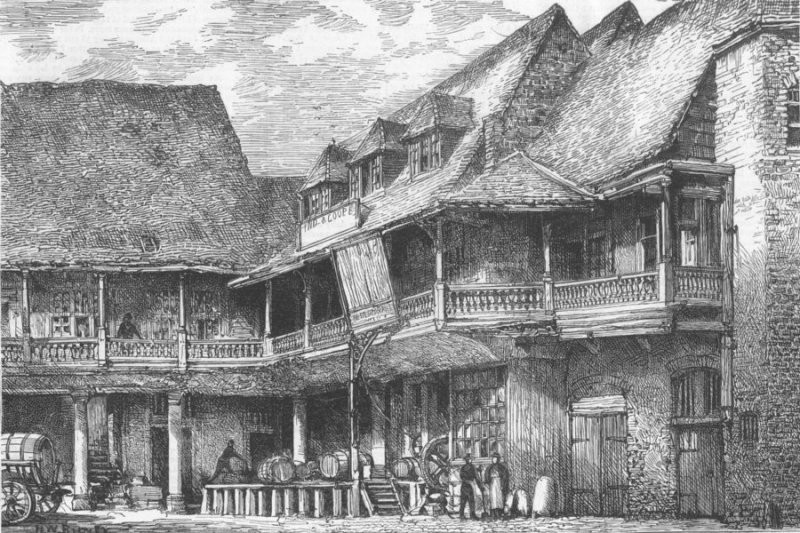 Tabard Inn, Southwark
The Tabard was immortalised by Chaucer when he selected it as the starting place of the pilgrims in his celebrated Pilgrims Progress. He sets the scene at the Inn on the night before the pilgrimage:

âByfel that in that sesoun on a day,
In Southwark at the Tabard as I lay
Ready to wenden on my pilgrimage
To Canterbury, with ful devout courage,
At night was come into that hostelrie,
Wel nyne and twenty in a compainye.â
The Tabard as it stood in 1875 was not the inn that Chaucer knew of 1388; the original was destroyed by fire in 1628.

The inn first appeared on the scene in 1304 when the Abbot and Convent of Hythe became the owner of two houses purchased from William Latergareshall. On the site of these houses the Abbot built a dwelling house and a hostelry and erected the sign of the Tabard, a sleeveless leather coat. It was probably the first of the High Street inns and the forerunner of a multiplicity of inns, which became the trademark of Southwark.

We know from records kept by Chaucer that the proprietor at the time of the pilgrimage was Henry Bailly who was the representative for Southwark at the Westminster Parliament of 1376. Fire was always the greatest hazard to the wooden framed buildings of that time and in 1628 Chaucerâs inn was completely destroyed.

Its replacement was a more sturdy structure built of brick and it appears in the records under the name of the Talbot, undoubtedly a mistranscription of Tabard. Unlike the double tier gallery of the George Inn, the Talbot had a single overhanging gallery supported on pillars and with dormer windows. It continued to function as an inn until it was demolished in 1875.

Talbot Yard is now full of offices rather than inns.

Borough tube station is a London Underground station in the London Borough of Southwark. It is on the Northern Line, between Elephant and Castle and London Bridge stations.

The Borough (of Southwark) is an area of the London Borough of Southwark situated 1.5 miles east south-east of Charing Cross.

Much of the area around the Tate Modern gallery and the Globe Theatre is now referred to by the historic name of Bankside.

In common with much of the South Bank, The Borough has seen extensive regeneration in the last decade. Declining light industry and factories have given way to residential development, shops, restaurants, galleries and bars. The area is in easy walking distance of the City and the West End.

The Borough is generally an area of mixed development, with council estates, office developments, social housing and gated communities side by side with each other.

Borough station was opened on 18 December 1890 as part of the first deep-level tube railway, the City and South London Railway, and was rebuilt in the 1920s when the tunnels were enlarged.