The corner of Houghton Street and New Inn Passage taken on a 1901 photo just prior to the clearence of the area for the Aldwych-Kingsway improvement scheme. 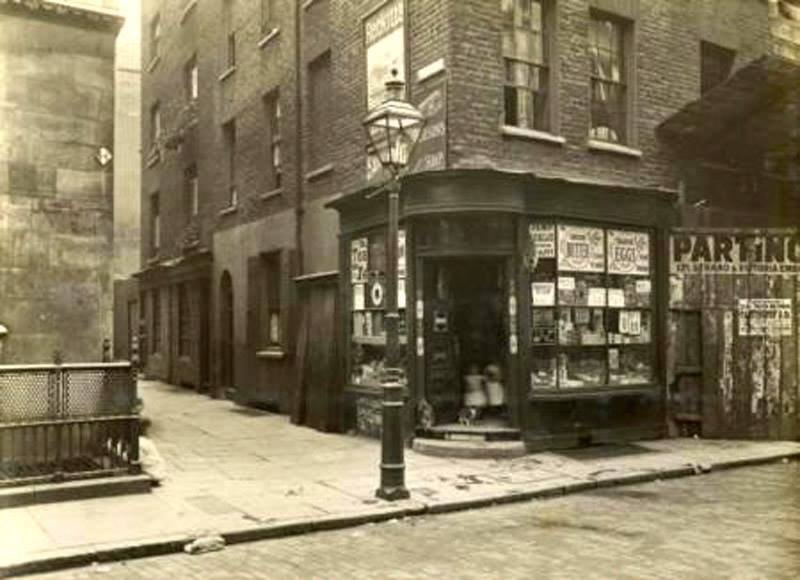 This photo from 1901 shows buildings in New Inn Passage, Houghton Street, then called the Claire Market Slum, which was demolished as part of the Aldwych-Kingsway improvement scheme in 1905.
The area was part of the 'Clare Market Slum', a cluster of narrow, dirty streets lined with butchers' and greengrocers' shops.

Clare Market was originally centred on a small market building constructed by Lord Clare in c.1657, but the retail area spread through a maze of narrow interconnecting streets.

Butchers would slaughter sheep and cattle for sale. An area was set aside for Jews to slaughter kosher meat. The market mostly sold meat, although fish and vegetables were also sold. An early theatre was in Gibbon's Tennis Court, in the Clare Market area.

A club of artists, including William Hogarth, met at the Bull's Head Tavern in the market.

The area was not affected by the Great Fire of London, and the decrepit Elizabethan buildings survived until the area, by then a slum, was redeveloped by the London County Council in around 1900 to create the Aldwych and Kingsway.

Parts of the London School of Economics now occupy the site, and the name is commemorated in an academic journal published by the university, entitled The Clare Market Review. Furthermore, Ralf Dahrendorf, the former director of the LSE, chose the title Baron Dahrendorf of Clare Market when he was made a life peer in 1993. One of the main buildings at the centre of the LSE Campus is called the Clare Market Building.