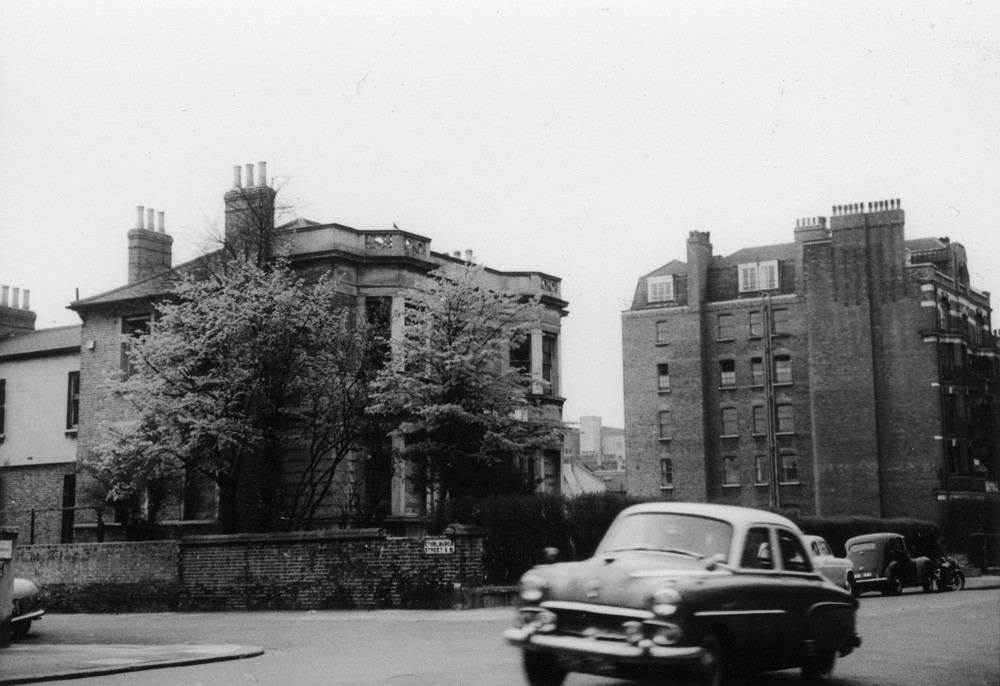 Albert Bridge Road at the former end of Ethelburga Street (1958)
Credit: Gwyneth Wexler
Ethelburga was the sister of Earconwald, Bishop of London. Earconwold founded a double monastery at Barking for his sister, and a monastery at Chertsey for himself. Barking appears to have already been established by the time of the plague in 664 AD.

Ethelburga had been at some time based in a manor which was sited in what became Battersea Park near to Albert Bridge Road.

A house called Park House (now demolished) was built in 1873 at the (north) corner of Ethelburga Street and Battersea Bridge Road for Benjamin Cooke, a builder who built a lot of Battersea.

In 1875, Nevil House and Nevil Villa were built by builder John Roberts on the south corner of Ethelburga Street where it met Albert Bridge Road for John Nevil Maskelyne, a watchmaker turned stage magician, who specialised in exposing fraudulent spiritualists. Nevil House was considerably extended in 1879 for Maskelyne who later had a local street named after him.

However, solid Victorian housing was the main stay of Ethelburga Street.

The area suffered enormously during the Blitz with much of the area around Ethelburga Street and Bolan Street destroyed. About eighty prefabs were built in this area and then in the early 1960s, a larger area was cleared to make way for the London County Councilâs Ethelburga Estate. The subsequent naming of the blocks and internal roads held local significance: Jagger House, and Henty and Maskelyne Closes were called after famous Battersea residents; Watford Close after Watford Villas, and Searles House after Searle Street, obliterated by the development.

Along with the new building, the line of Ethelburga Street was dramatically altered by the new estate after the turn of the 1960s - formerly the street had cut east-west separating Rosenau Road and Worfield Street from each other, ending at Albert Bridge Road.