The Foundling Hospital in London was founded in 1741 by the philanthropic sea captain Thomas Coram. 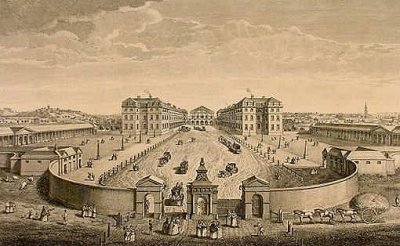 Foundling Hospital
It was a children's home established for the education and maintenance of exposed and deserted young children. The word 'hospital' was used in a more general sense than it is today, simply indicating the institution's hospitality to those less fortunate.

The first children were admitted to the Foundling Hospital on 25 March 1741, into a temporary house located in Hatton Garden. At first, no questions were asked about child or parent, but a distinguishing token was put on each child by the parent. These were often marked coins, trinkets, pieces of cotton or ribbon, verses written on scraps of paper. Clothes, if any, were carefully recorded. One entry in the record reads, Paper on the breast, clout on the head. The applications became too numerous, and a system of balloting with red, white and black balls was adopted. Children were seldom taken after they were twelve months old.

On reception, children were sent to wet nurses in the countryside, where they stayed until they were about four or five years old. At sixteen girls were generally apprenticed as servants for four years; at fourteen, boys were apprenticed into variety of occupations, typically for seven years. There was a small benevolent fund for adults.

In September 1742, the stone of the new Hospital was laid in the area known as Bloomsbury, lying north of Great Ormond Street and west of Gray's Inn Lane. The Hospital was designed by Theodore Jacobsen as a plain brick building with two wings and a chapel, built around an open courtyard. The western wing was finished in October 1745. An eastern wing was added in 1752 'in order that the girls might be kept separate from the boys'. The new Hospital was described as 'the most imposing single monument erected by eighteenth century benevolence' and became London's most popular charity.

In 1756, the House of Commons resolved that all children offered should be received, that local receiving places should be appointed all over the country, and that the funds should be publicly guaranteed. A basket was accordingly hung outside the hospital; the maximum age for admission was raised from two months to twelve, and a flood of children poured in from country workhouses. In less than four years 14,934 children were presented, and a vile trade grew up among vagrants, who sometimes became known as Coram Men, of promising to carry children from the country to the hospital, an undertaking which they often did not perform or performed with great cruelty. Of these 15,000, only 4,400 survived to be apprenticed out. The total expense was about Â£500,000, which alarmed the House of Commons. After throwing out a bill which proposed to raise the necessary funds by fees from a general system of parochial registration, they came to the conclusion that the indiscriminate admission should be discontinued. The hospital, being thus thrown on its own resources, adopted a system of receiving children only with considerable sums (e.g., Â£100), which sometimes led to the children being reclaimed by the parent.

This practice was finally stopped in 1801; and it henceforth became a fundamental rule that no money was to be received. The committee of inquiry had to be satisfied of the previous good character and present necessity of the mother, and that the father of the child had deserted both mother and child, and that the reception of the child would probably replace the mother in the course of virtue and in the way of an honest livelihood. At that time, illegitimacy carried deep stigma, especially for the mother but also for the child. All the children at the Foundling Hospital were those of unmarried women, and they were all first children of their mothers. The principle was in fact that laid down by Henry Fielding in The History of Tom Jones, a Foundling: Too true I am afraid it is that many women have become abandoned and have sunk to the last degree of vice [i.e. prostitution] by being unable to retrieve the first slip.

There were some unfortunate incidents, such as the case of Elizabeth Brownrigg (1720â1767), a severely abusive Fetters Lane midwife who mercilessly whipped and otherwise maltreated her adolescent female apprentice domestic servants, leading to the death of one, Mary Clifford, from her injuries, neglect and infected wounds. After the Foundling Hospital authorities investigated, Brownrigg was convicted of murder and sentenced to hang at Tyburn. Thereafter, the Foundling Hospital instituted more thorough investigation of its prospective apprentice masters and mistresses.

The musical service, which was originally sung by the blind children only, was made fashionable by the generosity of George Frideric Handel, who frequently had Messiah performed there, and who bequeathed to the hospital a fair copy (full score) of his greatest oratorio. Handel's involvement had begun on 1 May 1750 when he directed a performance of Messiah to mark the presentation of the organ to the chapel. That first performance was a great success and Handel was elected a Governor of the Hospital on the following day, a position he accepted. In 1774 Dr Charles Burney and a Signor Giardini made an unsuccessful attempt to form in connection with the hospital a public music school, in imitation of the Pio Ospedale della PietÃ  in Venice, Italy. In 1847, however, a successful juvenile band was started. The educational effects of music were found excellent, and the hospital supplied many musicians to the best army and navy bands.

In the 1920s, the Hospital decided to move to a healthier location in the countryside. A proposal to turn the buildings over for university use fell through, and they were eventually sold to a property developer called James White in 1926. He hoped to transfer Covent Garden Market to the site, but the local residents successfully opposed that plan. In the end, the original Hospital building was demolished. The children were moved to Redhill, Surrey, where an old convent was used to lodge them, and then in 1935 to the new purpose-built Foundling Hospital in Berkhamsted, Hertfordshire. When, in the 1950s, British law moved away from institutionalisation of children toward more family-oriented solutions, such as adoption and foster care, the Foundling Hospital ceased most of its operations. The Berkhamsted buildings were sold to Hertfordshire County Council for use as a school and the Foundling Hospital changed its name to the Thomas Coram Foundation for Children and currently uses the working name Coram.

The Foundling Hospital still has a legacy on the original site. Seven acres of it were purchased for use as a playground for children with financial support from the newspaper proprietor Lord Rothermere. This area is now called Coram's Fields and owned by an independent charity.