Northumberland House was a large Jacobean townhouse in London, which was the London residence of the Percy family, the Dukes of Northumberland.

The Strand frontage of Northumberland House (1752)

The pedestrianised area in the foreground became the site of Trafalgar Square - back then it was the Royal Mews
Credit: Giovanni Canaletto
In the 16th century, the Strand - which connects the City of London with the royal centre of Westminster - was lined with the mansions of some of England's richest noblemen. Most of the grandest houses were on the southern side of the road and had gardens stretching down to the River Thames.

In around 1605, Henry Howard 1st Earl of Northampton cleared a site at Charing Cross on the site of a convent and built himself a mansion, which was at first known as Northampton House. It had a single central courtyard and turrets in each corner. It stood at the far western end of the Strand from around 1605 until demolished in 1874. In its later years it overlooked Trafalgar Square. The section facing the Strand was 162 feet wide.

The layout reflected medieval traditions, with a great hall as the principal room, and separate apartments for members of the household. Many of these apartments were reached from external doors in the courtyard in the style still seen at Oxbridge colleges. The most striking external feature was the elaborate four storey carved stone gateway fronting the Strand. The garden was over 300 feet long, but unlike those of the neighbouring mansions to the east it did not reach all the way down to the river.

The house passed from Lord Northampton to the Earls of Suffolk, who were a branch of the powerful Howard family headed by the Dukes of Norfolk, and in the 1640s it was sold to the Earl of Northumberland at the discounted price of Â£15000 as part of the marriage settlement when he married one of the Howard family.

Regular alterations were made over the next two centuries in response to changes in fashion and to make the layout more convenient for the lifestyle of the day. John Webb was employed between 1657-1660 to relocate the family's living accommodation from the Strand front to the garden front. In the 1740s and 1750s the facade on the Strand was largely reconstructed and two wings were added which projected from the ends of the garden front at right angles. These were over 100 feet long and contained a ballroom and a picture gallery. The style of the new interiors was 'late Palladian'.

In the mid-1760s Robert Mylne was employed to reface the courtyard in stone, and he may also have been responsible for extensions to the two garden wings which were made at this time. In the 1770s Robert Adam was commissioned to redecorate the state rooms on the garden front. The Glass Drawing Room at Northumberland House was one of his most celebrated interiors. Part of the Strand facade had to be rebuilt after a fire in 1780. 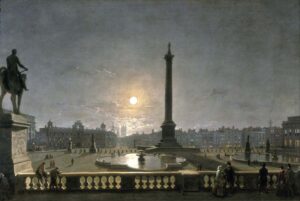 This painting by Henry Pether and dating from 1865, shows Northumberland House in the centre left and puts the location of the building in its modern context. The view is southwards across Trafalgar Square, with the towers of the Houses of Parliament on the skyline.

By the mid 19th century all of the other mansions on the Strand had been demolished. The area was largely commercial and was now not a fashionable place to live. The Duke of Northumberland of the day was reluctant to leave his ancestral home, despite pressure from the Metropolitan Board of Works, which wished to build a road through the site to connect to the new roads along the Embankment. After a fire, which caused substantial damage, the Duke eventually accepted an offer of Â£500 000.

In September 1874, the contents of Northumberland House went under the hammer. The lots consisted of three million bricks, the grand marble staircase, the elaborate ornamentation of the hall, dining, and reception rooms, the state decorations which adorned the hall and corridors, and a large quantity of lead stated to be of the weight of 400 tons. In the following month the Strand front also was sold for building materials. The aggregate sum realised by the sale amounted to but little more than Â£6500, and of this the grand staircase alone fetched Â£360.

After having stood for nearly three hundred years, the most notable house in the area was levelled in autumn 1874. 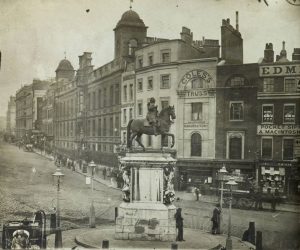 This image, taken in the 1870s, shows Charing Cross at the south side of the Strand, with Northumberland House just prior to its demolition. The lion that used to stand on top of the building has gone, later to be set up on Syon House. The walls of the mansion display 'Sale of Materials' posters.