Essex Road is one of the streets of London in the N1 postal area. 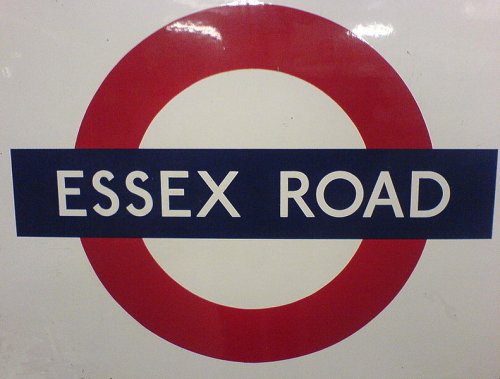 The GN&CR was intended to carry main line trains and the tunnels were constructed with a larger diameter (4.9 m) than the other deep tube railways being built at that time (roughly 3.4 m to 3.7 m). From 1913, the MR took control of the GN&CR and ran it under its own name until it became part of the London Passenger Transport Board (LPTB) in 1933.

In preparation for the LPTB's 'Northern Heights' plan the line was transferred to the control of the Morden-Edgware Line (now the Northern Line).

The Northern Heights plan involved the building of a connection to the surface platforms at Finsbury Park and the transfer of a London and North Eastern Railway (LNER) branch from there to Edgware, High Barnet and Alexandra Palace. By 1939 much of the work for the connection of the lines had been done and the opening of the connection was scheduled for autumn 1940 but the start of World War II put a halt to further construction. After the war the uncompleted parts of the plan were cancelled and Northern Line trains continued to run to Drayton Park on what became known as the Northern City Line or, from 1970, the Northern Line Highbury Branch.

The station was, from the early 1960s, closed on Sundays. In the 1970s it was also closed on Saturdays.

On 4 October 1975 the Northern City Line was closed (due to its weekend closure, Essex Road closed the day before) and ceased to be part of the London Underground. The line was transferred to British Rail (BR) and the unused connection between Drayton Park and Finsbury Park from the cancelled Northern Heights plan finally received the tracks to connect the line to the surface platforms at Finsbury Park. On 8 August 1976, the City Line reopened as part of the BR network with mainline size trains running to Old Street. On 8 November 1976, seventy-two years after the GN&CR first opened, the line was opened fully for mainline trains from Moorgate to Finsbury Park and beyond as had been originally intended.

By comparison with other underground stations built at the beginning of the 20th century, the station's surface building is nondescript and unremarkable. Unlike many other central London underground stations, Essex Road was never modernised with escalators and access to the platforms is by lift or a spiral staircase. The station also lacks the automatic ticket gates present at most London Underground and many National Rail stations.

At the lower level the lifts and staircase (of 157 steps) are connected to the platforms via a passageway and a short staircase rising between the two tunnels. The Underground's former operation of the station is evident from the unused and rusty fourth rail which once provided a return of the current from the tube trains serving the line. The third rail is still in use, with return now through the running rails.

Essex Road is a station on the proposed Chelsea-Hackney line.